GameStop Has Interesting Wii U, Xbox One & PS4 Deals

With the Holiday 2015 shopping season set to come to a close next Saturday, video game retailer GameStop has some sales on the Xbox One, Wii U and Sony’s PS4. All told, these sales can save holiday console buyers a small fortune on add-ons and accessories.

A recent Holiday 2015 flyer in-store and a special area online details all the deals on consoles that GameStop has running this week. Most of the deals on the consoles specifically are rehashes of savings being offered to all by Sony, Nintendo and Microsoft. For example, GameStop has the Star Wars Battlefront PS4 Bundle for $299. The retailer is offering a deep discount on every Xbox One bundle just like other outlets are. Even the Nintendo Wii U Super Mario Kart 8 Bundle is $249. 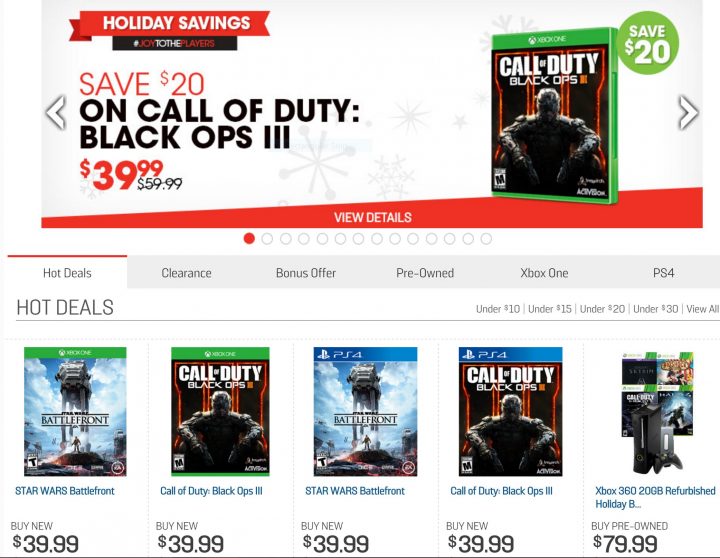 Shoppers that purchase any Xbox One console bundle at GameStop save $10 off the price of either an Xbox One Lunar White Wireless Controller or a three-month long subscription to Xbox Live Gold. Three months of Xbox Live normally cost $24.99. The Lunar White Controller sells for $64.99. For $349, Xbox One 1TB console buyers get a copy of Grand Theft Auto 5 with their console purchase too. This is on top of the free game that’s included with their console bundle already. Metal Gear Solid V: The Phantom Pain is $29.99. Halo 5: Guardians for Xbox One is $49.99. Bloodborne, a game exclusively available on PS4, is just $19.99.

A refurbished first-generation Xbox 360 with a copy of Grand Theft Auto 5 is $79.99. A refurbished Wii is $59.00, complete with copies of Super Mario Galaxy and Wii Sports. GameStop says that these deals are valid in-store and online while supplies last. Its website is offering free shipping for anyone that spends more than $50.

Presumably, GameStop is trying to get out in front before other last-minute Holiday 2015 deals arrive for gamers. Sony is kicked off it’s first week of holiday sales in the PlayStation Store last week, promising up to 70% off on games through the holiday season. Microsoft says it’ll begin its own Holiday 2015 game sales on December 22nd.