Gartner study says Apple, RIM and Android are on the move 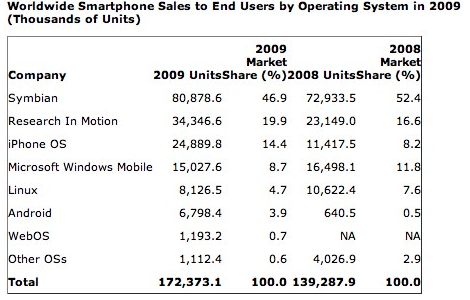 Its that time once again.  Its time for Gartner to release it figures about worldwide mobile phone sales for 2009.

Looking at smartphone OS market share alone, Gartner shows the iPhone OS, Android, and RIM making the biggest gains (up 6.2%, 3.4%, and 3.3% from 2008, respectively) at the expense of Windows Mobile (down 3.1%) and Symbian (down 5.5%). Although Gartner says that Symbian “has become uncompetitive in recent years,” (ouch) it concedes that market share is still strong especially for Nokia; something backed up by Nokia’s Q4 financials and reported quarterly smartphone growth of 5%. Regarding total handsets of all classifications sold, Nokia continues to dominate with 36.4% of all sales to end users (down from 38.6% in 2008) while Samsung and LG continue to climb at the expense of Motorola (dropping from 7.6% to 4.5% of worldwide sales in 2009) and Sony Ericsson.

All in all, its pretty much what I suspected.  In the US, we are an Apple, RIM and Android based country.  We like our iPhone OS, Blackberry messaging, and Android apps. For the rest of the world, its Nokia and Motorola.

Most people I know dont really have a Nokia/Motorola/Samsung phone.  It doesnt do enough for them. Dont get me wrong, I own a Nokia phone.  Its my backup when my G1 dies.  Nokia phones just work, but they arent as “sexy” and dont have the “wow” factor of a iPhone, a Blackberry or a Nexus One.

What does this report really mean?  It means that smartphones are here to stay and Apple, RIM and Android are going to go head-to-head for users over the next few years.  He who has the better OS/phone/user experience will win.