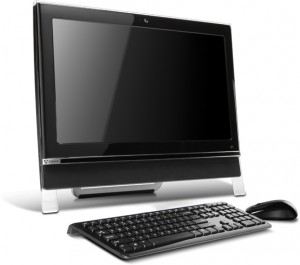 Gateway is embracing multi-touch input with the next generation of their all-in-one desktop – the ZX Series of the Gateway One.

Both feature multi-touch screens to take advantage of the touch features in Windows 7 Home Premium, but they also come bundled with the Microsoft Touch Pack (check out our InkShow on that) and Gateway’s unique TouchPortal interface, which allows the user to access Gateway’s custom suite of TouchGadgets for music, videos, photos, social media networks and more:

Between this and their upcoming Tablet PC (which better have multi-touch), Gateway looks primed and ready to support Windows 7 touch features. Look forward to more as the Windows 7 launch approaches.

From an entry-level model to a high-performance configuration, Gateway brings elegance, simplicity and advanced features to its new line of multi-touch all-in-ones 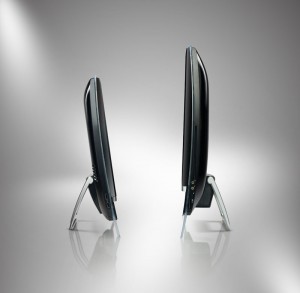 “While touch screen PCs to date have been cost-prohibitive and somewhat limited in their capabilities, Gateway is making this new technology more accessible to average consumers, while using an industry-standard solution that isn’t challenging to learn,” said Ray Sawall, senior manager of product marketing for Gateway.Â  “The functionality of Windows 7 and multi-touch brings an entirely new computing experience to consumers, and our affordable all-in-one PCs are the perfect vehicle for showcasing this technology.”

Resembling a sleek flat-panel TV, the glossy jet black Gateway One ZX Series offers an ultra modern, luxurious industrial design, which enhances the look of any room in the home.Â  Small touches add to the system’s clean streamlined design, including an adjustable back stand, integrated speakers, silver and clear acrylic accents and illuminated feet and keyboard â€“ which provide a beautiful ambient glow â€“ and make this PC stand out from the rest.

Integrating both a traditional desktop tower and flat-panel display into one, the Gateway One Series gives consumers the best of both worlds; powerful performance in a stylish, space-saving design, so it can be proudly displayed in any location.Â  In addition to a wireless keyboard and mouse, the One ZX Series includes a seamlessly integrated HD web cam and microphone, keeping the PC’s look and feel clean and elegant.Â  In addition, the integrated high-definition stereo speaker system eliminates extra components and clutter.

The innovative industrial design is offered at a variety of price points and configurations.Â  Both of the Gateway One ZX Series PCs offer a superior multi-touch screen experience and world class performance without the price premium typically associated with all-in-one PCs.Â  The affordable 20-inch ZX4800 Series is ideal for students, while the powerful One ZX6800 Series is a no-compromise, high-performance configuration entirely suitable for serious gaming.

“The advanced functionality, ease-of-use and fun that Windows 7 and multi-touch technology brings to the all-in-one PC category makes it a great time to consider a One ZX Series desktop,” saidÂ  Sawall.Â  “Combined with the no-compromise performance, advanced features and affordability of our new line, it’s an ideal solution for students, families and media enthusiasts.”

Leveraging the advanced touch capabilities of Windows 7 and multi-touch, the next generation of touch screen technology, the One ZX Series gives consumers a whole new way to interact with their digital data.Â  Delivering a superior touch screen experience, multi-touch offers more gesture combinations than single touch screens; a finer, more accurate way to interface with the PC, and an experience that is fast, intuitive and fun to use.Â  And for those needing to save even more space, the keyboard is now optional.

With multi-touch, consumers simply touch icons on the PC’s screen with just one or two fingertips to launch applications, movies, music, zoom in and out on photos and websites, resize windows and handwrite notes.

In addition, the unique Gateway TouchPortal, an intuitive interface that lies on the top of Windows 7, serves as the starting point for managing a suite of Gateway one-touch “gadgets” and Microsoft touch applications.Â  Gateway’s TouchGadgets provide quick access to music, videos, photos, social media networks and more, and include:

When users want to return to the familiar Windows 7 environment, they merely peel back the Gateway TouchPortal interface with a quick swipe of a finger.

The super-charged One ZX6810-01 comes loaded with an Intel Core 2 Quad processor and ATI HD4670 graphics, making it ideal for power-hungry media applications and graphic intensive games – Call of DutyÂ®, World of WarcraftÂ® – play them full-resolution with all the eye candy turned on.Â  In addition, Gateway included a 1TB hard drive and 64GB solid state drive (SSD), so consumers can save data on the standard drive and the operating system and applications on the SSD, significantly improving overall performance.Â  Gamers will be surprised by the impressive gaming capabilities offered in this lightning fast all-in-one PC.

Some models in the One ZX6800 Series offer a hybrid TV tuner and media center remote control, so families can also use the PC as a TV, watching and recording live television from any room in the house.Â  When used in a cramped dorm room or kitchen, eliminating a TV from a desk or countertop can be a tremendous benefit.Â  The wireless keyboard and mouse and a plug-n-boot single power cord further streamline the PC’s work area, keeping it neat and clutter free.

Featuring the same design but on a reduced scale, the ZX4800 Series is ideal for smaller environments, such as a dorm, home office or kitchen.Â  Priced unbelievably low for an all-in-one with multi-touch, these models deliver all the power and technology needed for general productivity applications, watching movies and home videos, viewing digital photos, or casual game playing.

Since its founding in 1985, Irvine, Calif.-based Gateway has been a technology pioneer, offering award-winning products and world-class service to customers worldwide. Gateway is a wholly owned subsidiary of Acer Inc., the world’s third-largest PC company. See www.gateway.com for more information.