Gateway announced today they’re bringing down the price and raising the specs on their high-end all-in-one, so if you’ve been eyeing the One ZX series with multi-touch displays for your home entertainment PC, now could be the time to buy. 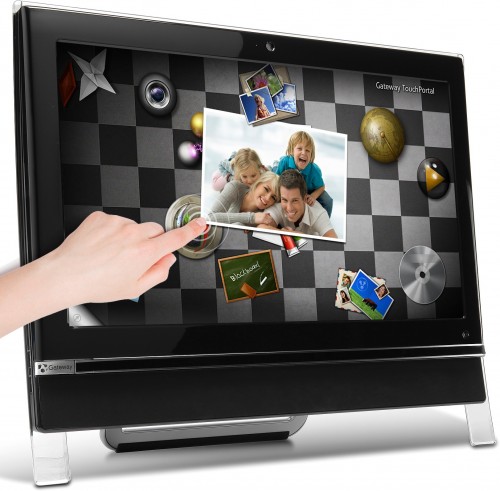 The ZX6900 now starts at $1019.99 (down from the ZX6800’s introductory price of $1399.99) and features an Intel Core i3 processor and Blu-Ray drive, so you can watch HD movies on its 23″ 1920×1080 display. The ZX4300 gets an incremental bump to a faster AMD Athlon II X2 Dual-Core processor, up from the ZX4800’s Intel Pentium processor. Both feature Gateway’s TouchPortal/TouchSuite for on-screen touch control of media, memos and social networking. Press release below.

IRVINE, Calif., May 19, 2009 – Today Gateway introduced new models in its line of sleek, modern touch-screen all-in-one ZX Series desktop computers.  The ZX4300 line sees the addition of AMD Athlon II X2 processors and other powerful desktop components, making it one of the best performing all-in-ones in its price range.  The larger and higher-performing ZX6900 Series also gets a boost from Intel’s powerful Core i3 and i5 processors and the addition of a Blu-ray drive, making it ideal for home entertainment. 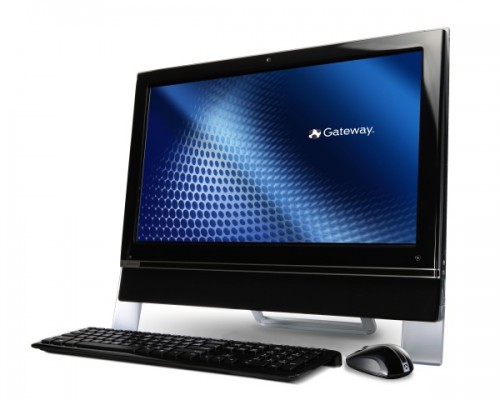 The ideal solution for cost-conscious consumers, Gateway’s all-in-one PCs easily double as a TV and/or home entertainment center, making them perfect for small rooms, such as a dorm, home office or kitchen.  High-definition widescreen LCDs, powerful components and integrated wireless capabilities make it easy to play online content from a Hulu or Netflix account or connect to other online entertainment portals.

“Because all-in-ones integrate a desktop tower into the back of a flat-panel display, they typically use smaller, less powerful notebook components that don’t require a lot of space,” said Steve Smith, senior business manager of consumer desktops, Acer America.  “However, Gateway was able to leverage the latest desktop components to give consumers the best of both worlds – powerful performance and lower cost, all in a stylish, space-saving design.”

The stunning Gateway One ZX Series resembles a sleek, glossy flat-panel TV with its ultra modern luxurious industrial design, and enhances the look of any room in the home.  Ideally suited for a kitchen, den, bedroom or a home office, its touch screen display, wireless keyboard and mouse, webcam and integrated high-definition stereo speaker system eliminates extra components and clutter, for a clean and streamlined look.

With its snazzy touch screen capabilities, the One ZX Series delivers a fun, exciting way to interact with music, videos, photos, social media networks and more.  By simply touching icons on the PC’s screen, consumers can launch applications, movies, music, zoom in and out on photos and websites, resize windows and handwrite notes.

The ZX6900-01e comes loaded with an Intel Core i3 530 processor, a slot load Blu-ray/DVD drive and high-def audio with 5.1-channel surround sound support, so consumers can immerse themselves in online and high-def entertainment.

The Gateway One ZX6900-01e is available now at leading retailers nationwide.  An additional model will be available in June and will include a TV tuner and the faster Intel Core i5 650 processor.

About Gateway
Since its founding in 1985, Irvine, Calif.-based Gateway has been a technology pioneer, offering stylish, user-friendly products and world-class customer service. Gateway is a wholly owned subsidiary of Acer Inc., the world’s second-largest PC company. Through collaboration with suppliers, the company strives to design environmentally friendly products and establish a green supply chain. See www.gateway.com for more information.