A $878 check is on the way to me for a pair of used iPads thanks to Gazelle. Selling old gadgets on Craigslist or eBay can be tricky business. After having mixed results with those services I know use Gazelle.com as a first stop for selling my used gadgets. There are several buyback services out there, but I’ve come to trust Gazelle and don’t have any plans to switch services as long as their bids remain competitive.

When the iPad 2 was announced on March 2, I’d already sold my household’s pair of iPad 2’s to Gazelle. The company offered me $437 for each of our 32GB Wi-Fi iPads, which have an original MSRP of $599. Paying about 50 cents per day of iPad use isn’t a bad deal at all. This made upgrading to the new iPad 2 relatively painless and this time around my wife and I opted for iPads loaded with Verizon 3G.

While I may have been able to earn a few more bucks by selling the iPads to private parties, I would’ve had to spend at least a couple of hours on the process, meet with strangers or dealt with online payments and shipping. 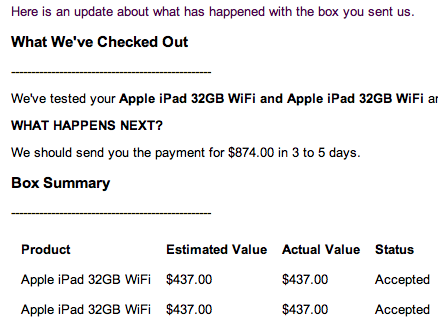 Gazelle simply sent out a pre-paid USPS Priority box that fit the pair of iPads perfectly. I dug up the iPads’ original packaging and chargers, stuffed it all in the box and dropped everything off at the post office. Yesterday I received an acknowledgement email saying that Gazelle had received the iPads. Today, the company followed up with the above note, telling me that the iPads did indeed check out as ‘perfect.’ If Gazelle finds that the gadgets you ship them aren’t as pristine as described, they will lower your payout or return the device if you prefer.   I always ask Gazelle for a physical check to avoid PayPal fees.

My favorite part of Gazelle is that the service allows 30 days to mail in gadgets after getting a price quote. This means I have the flexibility to keep a gadget before its replacement arrives. Fortunately, I was able to score a pair of iPad 2’s the day they launched, but it’s nice to have a buffer. Some competitive services require almost immediate shipment.