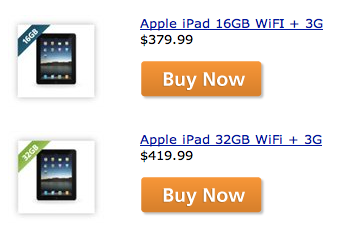 Gazelle bought truckloads of first generation iPads and is apparently having trouble selling them through its normal channels. The company is now selling used iPads at GazzelleiPads.com for as low as $329.99. The best value is probably the 64GB WiFi + 3G iPad, which is priced at $479.99, which is $20 less than the entry-level iPad 2.

Gazelle is a company that buys used gadgets from individuals through its website and its partners, including Costco. The prices offered to sellers depending on supply, demand and the conditions of the device.

I’ve sold devices to Gazelle on several occasions and was very pleased when the company forked over $437 for my nearly year-old iPad back in March. I used the proceeds towards a 64GB iPad 2 with Verizon 3G. I don’t miss my old iPad, but I could buy it (or at least a similar one) back for $399.

I obviously enjoy getting top dollar for used gadgets, but this pricing strategy makes me worry a bit for Gazelle.
via Liliputing