What if they threw a party for The Five Year Anniversary of the Tablet PC and nobody came? What if even the guest of honor stayed away? Well, it certainly seems that Microsoft and Tablet PC manufacturers want this anniversary to pass without any real noise or attempt at celebration. Am I suprised? Not in the least. This silence as the Tablet PC passes this milestone is just another in a long line of marketing misteps that have plagued the development of Tablet PCs and Ultra-Mobile PCs from their inception.

I know that sounds harsh and to some it might seem unfair. But in my one man’s opinion many of the issues we have faced with Tablet PCs, and later with Ultra-Mobile PCs, have their roots in the woeful marketing efforts by Microsoft and the OEMs.

So as we here at GottaBeMobile.com wave the anniversary flag and look back on 5 Years of the Tablet PC, let’s take a look back at the marketing of these unique devices, in hopes that maybe some of these past mistakes won’t get repeated again in the future.

A Product Ahead of Its Time 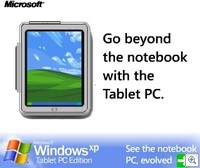 The Tablet PC has more in common with the Chicago Cubs than I think anyone would like. ““Wait Ã¢â‚¬Ëœtill next yearÃ¢â‚¬Â always seems to be the rallying cry. In some ways, an argument can be made that from the beginning the Tablet PC platform, and later the UMPC/Origami platform, was released before its time. What we have on the market today is far superior on any level to those early Tablet PCs. First generation machines like the HP tc1000 and the Toshiba M3500 were quickly replaced with better second generation devices. The Toshiba M200 quickly became a go-to convertible Tablet PC for many. Microsoft has a track record with this sort of marketing. In fact it is almost a mantra that Microsoft will get it right the third time around on most releases.

What Are These Devices Anyway?

The original marketing campaign for Tablet PCs focused primarily on Inking as a new method of data capture. Remember, mobility as we know it today was just beginning to take hold at that point in time. Was it wrong to focus on Inking? It was certainly a new ““featureÃ¢â‚¬Â but, at the time of the release much of that focus was on converting Ink to text. When your best argument for those who questioned the accuracy of handwriting recognition is that ““you don’t train the software, it trains you,Ã¢â‚¬Â I think there is a problem. While the early handwriting recognition worked well, what we have today, while still not perfect, is much more robust, and intriguingly, but not surprisingly, there was very little noise about the improvements in recognition and handwriting training when Vista came along.

Also confusing, was the fact that Tablet PCs came with a ““differentÃ¢â‚¬Â operating system. Or so many believed. While the Tablet OS was a superset of XP, the lack of clarity here led many to believe that Tablet PCs were not full computers. I can’t count the number of posts on TabletPC Buzz that were responded to with a statement that said, ““a Tablet PC has the full XP operating system.Ã¢â‚¬Â But when you are depending on enthusiasts and evangelists to tell your story, again, you’ve got a weakness in your marketing strategy.

The other mantra that Tablet PC evangelists repeated ad nauseum in the early days was that you needed to put your hands on a Tablet PC to appreciate what it offered. The only problem with that was getting your hand on a device was almost impossible. While in the early days, a user could see HP’s Tablet PCs in some Franklin Covey stores and a few big boxes, you had to really search to be able to experience what Tablet PCs offered. Of course not having a pen available at point-of-sale when they were available, while understandable, was a crucial mistake. In my opinion, and that of many others, the fact that users could not get hands on with a device that essentially offered a new tactile experience in relating to a PC was a critical and crucial error.

A few companies began to ““get itÃ¢â‚¬Â and attempt advertising campaigns. Gateway and Lenovo are notable for this. In fact, Gateway can be pointed to as a real success story in their marketing efforts. Not only did they advertise with a clever campaign that showed off what the Tablet PC was capable of, but they managed to get their devcies into stores and in fact sell quite a few. That said, Gateway shied away from using the term Tablet PC and instead created their campaign around the Gateway Convertible PC. Lenovo created an advertising campaign that was too clever by half. While it had a sexy commercial featuring Ink spilling and transforming into a Tablet PC (see this link) it really didn’t show off what a Tablet PC was capable of other than looking very cool when it morphed out of a big spill of ink.

Many Tablet PC evangelists suggested Ink Enabled or Ink Aware as slogans to help market Tablet PCs. On many levels that made perfect sense. Later, with the release of the UMPC that became Ink and Touch Enabled. Again, that was overlooked as a marketing point.

While Microsoft may be known for getting it right the third time around, it ignores a fundamental law of nature, that every mother tells every child. First impressions count. Tablet PCs were dismissed early on. To this day, even though the technology has vastly improved, Tablet PCs are still stuck with a label as a failed device. In the fast moving technology sector that is tough to change. In fact, I would argue that Microsoft has yielded the playing field to others by not having a clear concept of how to sell Tablet PCs early on, and failing to address those problems throughout the life of these devices. The most recent example of this has to do with the release of Ultra-Mobile PCS. Again, the marketing hyped the devices beyond what they were capable of at the first release. UMPCs were roundly critiziced on many levels. Many of those criticisms focused on the lack of a keyboard, which quickly sent the OEMs scurrying to come up with keyboards for the next generation. What was an excellent concept for a small mobile device got muddied along the way. Some would call that an overreaction. Some would call it the market at work. I would call it a tragic mistake of marketing. The label of UMPCs as a failed product still sticks, and it looks like others (Intel, Apple, Nokia, HTC) are ready to move beyond Ultra-Mobile PCs to devices that truly embody that concept. 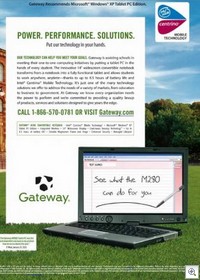 Bill Gates has been a champion of Tablet PCs from the beginning and still is one. But it seems that from within his company, and with his partners, he has been tilting at windmills. The dream of making every portable computer, Tablet PC capable, seems to have fallen by the wayside, at least for the moment. Some of that indeed has to do with the technology, but largely that is due to the many failures in marketing through the first five years. I, and others, have said the entire approach to marketing Tablet PCs seems to be operating as if everyone is snake-bit by previous failures. I still think that is true.

Success As A Niche Market Device

There are markets where Tablet PCs do well. Most of those are in vertical spaces. Health care, real estate, construction, and other sectors that use forms, as well as education continue to see growth. Intriguingly, these vertical markets take a different approach to selling than the consumer space does, often allowing buyers to get hands on with devices. There is something to be said for that, and I’m not sure Microsoft, OEMs, or consumer retailers could change things to reflect that at this point in the game.

Nothing could be more telling than the failure to acknowledge the five year anniversary of the Tablet PC by Microsoft and the OEMs. It is sadly indicative of what we’ve seen for the last five years. The anniversary was a golden opportunity to try and correct some past mistakes and attempt to change some entrenched opinions. Every day we see someone discover Tablet PCs for the first time and watch as they experience the change this device can have in their computing needs. Unfortunately, a brighter spotlight with more energy than enthusiasts and evangelists can provide needs to illuminate that story.