Got my hands on another rugged Tablet PC recently: the ARMOR X7 from DRS Technologies, the smaller brother to the X10gx I reviewed earlier. But don’t let the size fool you. It may be petite by comparison, but it’s just as rugged. Definitely tough enough.


For an iOS-friendly version, download the M4V file here.

Comparison to the X10 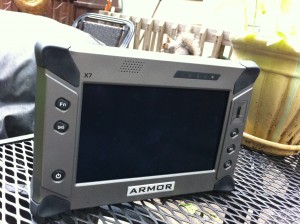 The ARMOR X7 with a squirrel

Obviously there are a lot of similarities between the X7 and X10. Instead of rehashing all the aspects of the two that are the same, I’m going to focus this review on the differences in size and form factor.

The X7 sports a dual-digitizer outdoor-viewable display. Resistive touch allows for input while gloved. The active digitizer is Wacom Penabled. The included pen is a slim model. I had thought slim pens were not pressure sensitive, but either that has changed or it’s because the pen is custom for the X7. Regardless, finding the pen was pressure sensitive was a pleasant surprise. It also features a right-click button but no eraser.

Generally, I do not care for slim and/or short pens, and the pen with the X7 was no exception. In addition, the tether got in my way a lot. If I was using the X7 on a regular basis, I would keep that pen as a backup and go with a full-sized pen as primary. I would recommend that for anyone who expects to do a lot of pen work. Should work with any Wacom Penabled pen, such as my Fujitsu pen, and DRS offers full-sized rugged pens, such as the heavy duty one included with the X10.

Resolution on the 7-inch display is 1024 x 600. That’s high resolution for the size, but makes screen elements hard to read. Adjusting the ppi helps, but you have to be mindful of applications that are geared for the default ppi. This should not be a huge problem since this tablet is likely to run custom software that should be tailored for the device, but it’s important to understand how your software will fit the screen. 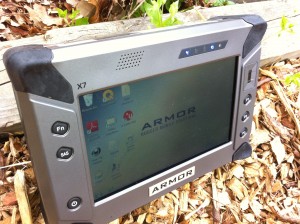 Down in the dirt (well, wood chips)

Packing an Intel Atom N450 1.66 GHz processor, the X7 is not a powerhouse, but the SSD makes it very responsive, sleeping and resuming in a second. Of course, the lower powered processor means less heat and longer battery life. The back grill did a great job dissipating the heat without getting hot even in the sun.

The review unit was equipped with dual 5900mAh extended battery packs. I gauged battery life with estimates during regular use and let the packs run down completely once. The ceiling, with minimal usage and no wireless, was a bit more than six hours, so 2-3 hours per extended battery pack with regular usage should be expected. The packs are hot-swappable as long as one charged pack is in, drain asymmetrically, and left and right side packs are identical and interchangeable. This allows for easy battery life extension while using spare battery packs. The battery system is highly scalable. 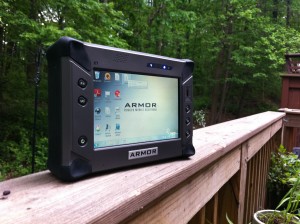 Out on the deck

As a rugged PC, the X7 is no featherweight. It is clearly designed for two-handed use and feels great that way. The battery packs double as handholds and distribute the weight nicely. Held in one hand, it feels a bit unbalanced but not unreasonably so. The rubber bumpers in the top corners helped when maintaining a grip this way. Carrying it by one handhold was not as convenient as using the handle on the X10, but it was comfortable. There are spots to attach a carrying strap on both the top and bottom of the unit.

Like the X10, the X7 can stand on its own but at a slight angle. The power port, USB port, and docking port are all located on the bottom (there are no other ports). Due to their placement, it won’t stand while the USB or power ports are in use, but it should stand while on a dock, though I was not given to review. Also, the USB port is mini-USB, not standard, so I would recommend keeping a mini-to-standard adapter handy. Correction: A mini-to-standard adapter was included with the review unit, which I assume is standard issue. It had slipped out of its shipping package into the bottom of the box at some point, and I did not discover this until I repacked the unit for return. I apologize for the oversight.

My lack of such an adapter prevented me from testing it with a USB keyboard, which would have been awkward any way given the placement of the port. However, Bluetooth 2.0 + EDR is included, allowing for the use of a Bluetooth keyboard while out in the field. 802.11n is also standard, while GPS and Gobi integrated broadband are optional. I did test the GPS, which proved accurate.

I found the placement of buttons on both sides of the unit to be beneficial. It was easier to access them while held in two hands, while also making the screen more centered. Between that and the handholds, the feel of the device in hand is among the best I’ve experienced, certainly better than any uniformly flat slate. Not as good for lounging, but better for working.

I saved some samples from the built-in camera this time. Photos in sunlight were adequate but not worth it in dim lighting. Keep in mind, this camera is designed for close-up work and reading barcodes, for which is performs as expected. 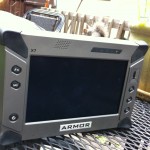 The ARMOR X7 with a squirrel 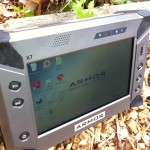 Down in the dirt (well, wood chips) 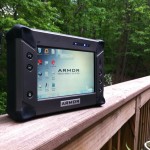 Out on the deck 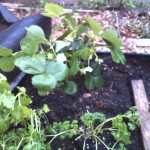 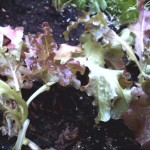 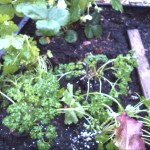 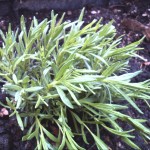 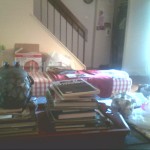 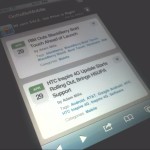 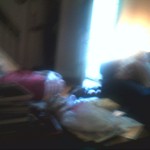 As this tablet will be deployed in a vertical environment, a typical user will be running custom software designed for their task. Again, it’s important to think about how this software will look on the small high-res display. Default OS is Windows 7 Professional, so the tablet can run any Windows application (within the limits of the hardware), but it’s just not intended for things like Office and Acrobat.

I forced a start-up error after running the battery to zero and found that the programmable buttons allowed for switching between start-up options, something that did not work on its big brother. That’s important since there’s no keyboard and plugging in a USB keyboard can be problematic due to the port’s placement and size. I didn’t go deep into it, but this basic resume error was easily handled. Glad this problem was fixed.

A machine like this either works for your job or doesn’t. If you’re out in the field and need a compact Windows PC that can take a beating, all I can say is the X7 was easy to handle and ran reliably. It will probably work fine in an office environment on a dock, but it is unmistakably designed as a handheld device. Felt great in two hands. I couldn’t beat up the review unit for obvious reasons, but I felt comfortable handling it while working the garden even in a slight rain. I did not feel a spark with this PC as I have with others, such as the X10, but I think it will get the job done when deployed as intended.

As with the X10, pricing varies based on volume and your requirements. Docking and extended battery solutions will add to that cost. Full details on the DRS website.