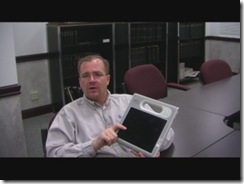 Motion Computing has officially announced their F5 Tablet PC. The F5 is targeted for the field force vertical market. The F5 is a semi-rugged Tablet PC, positioning itself between commercial Tablet PCs like the LE1700 and more rugged Tablet PCs like Mobile Demand’s T8700. It improves upon Motion’s Clinical Tablet PC, the C5, by including integrated Sprint Broadband WWAN, IP54 rating, 32 GB SSD option, and an optional vehicle dock. It also features a new two-tone color scheme, which is less likely than the C5 to show dirt. It includes other features from the C5 like an integrated 2 megapixel camera, handle, RFID, optional barcode scanner, a 10.4″ active digitizer screen, 1024 x 768 resolution, and a 1.2 ghz Core Solo processor. The F5 weighs 3 lbs 9 oz.

I’ve been fortunate enough to use the F5 the past two weeks, and have thoroughly enjoyed it. Weighing in at 3 lbs 9 oz, it is well balanced and quite comfortable to hold in various positions. I have not enjoyed using a pure slate, including the TC1100, as much as I’ve enjoyed the F5. I can’t over emphasize enough the value the handle and the flush 10.4″ screen brings. In addition, the 32 GB SSD helps a lot with battery life, as I’m experiencing about 5 hours of battery life running Windows XP. As I noted in an earlier post, one of my customers, a cable manufacturer, already has their eye on one to use in shipping, receiving, and inventory management. The pen, SSD drive, integrated camera, integrated RFID, and handle were the features that won them over.

As I point out in this video review, though, there are several important weaknesses: no integrated USB ports, no support for touch, and a Core Solo processor. It is worth noting that many of the reasons field force workers would need USB ports are covered by the F5 integrating RFID, a barcode scanner, and Bluetooth for GPS connectivity. In addition, USB is available through the docking station and an optional vehicle dock. The lack of integrated USB ports, though, has bit me several times just this past week when trying to exchange data with customers or with other computers. Motion could get away with no USB with the healthcare focused C5, but I expect the lack of USB to be major pain point for potential F5 field force customers.

As I noted above, the 10.4″ flush screen is a wonderful sweet spot for note-taking. Unfortunately, the $2699 starting price will put this slate Tablet PC out of reach for most consumers. I asked Motion about the potential for more consumer friendly Tablet PCs like the much requested ( and anticipated ) LS800 / LS900 variant. They told me they have no plans for an “LS900” or smaller form factor Tablet PC, but are always looking solutions that balance features, performance, and cost.