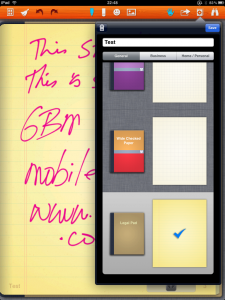 With the release of the Tega v2 and the HP Slate 500 many a Tableteer has been hoping, and some have been praying that the slate form factors will handle Digital Inking well on capacitive screens. Thanks to Windows 7, (yes Windows 7) the experience on the Tega v2 isn’t as bad as I thought it would be on that device. Compared to an active digitizer it still leaves me wanting better though. I haven’t touched the HP Slate 500 so I can’t comment there.

As you know, I’ve been putting up a number of posts about different note taking Apps on the iPad that offer Digital Inking on that platform. So, when I heard about the release of a couple of new iPad Apps, Noteshelf and Notes Plus, I thought I would give them a try. That turned into this InkShow and for better or worse this comparison. I start with a Lenovo X201T Tablet PC, then move on to the Tega v2, then the iPad with the two new Apps. Before you ask, there’s no best of here. Well, I take that back. Inking on a Windows 7 Tablet PC like the Lenovo will hands down beat anything else on any other form factor. There’s no getting around that fact. What I think you will see though is that in the case of Noteshelf and other Apps like it, developers are getting closer to creating a good Inking experience for the iPad. I think you’ll also see that the newer slate form factors using Windows 7 will surprisingly not be as good as a Tablet PC. As a side note, I’m not hanging onto many hopes for Digital Inking from any of the Android Tablets. I could be wrong there, but I just don’t sense it as a priority on that platform.

Now let’s define that “good Inking experience.” What’s good enough for me may not be for you. What’s not good for me, may be more than sufficient for you. As I say over and over my note taking with Digital Ink is quick, down, and dirty. In rehearsal I’m watching the stage and scribbling on a screen simultaneously. I can’t afford to watch my hand and/or the stylus. This isn’t meticulous work, it is quick and I need the medium to not get in the way. With a Tablet PC, not only could I do that, but using OneNote I could, in most cases, find what I scribbled with its excellent search. I don’t think we’ll ever see that on an iPad. Up until now the iPad App, Penultimate has come the closest to giving me what I am looking for on the iPad.

Not only does the screen have an impact as to the success of Digital Inking, the stylus plays a part as well. I use several in the InkShow and you can judge the different results for yourself. How the conductive material on the end of a stylus interacts with a capacitive screen is a key to good (or bad) Inking on those screens. 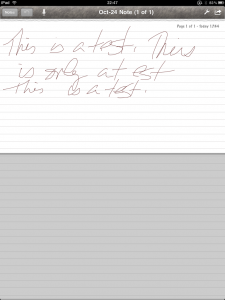 Now on to those iPad Apps. Notes Plus uses a move-able Palm Protection scheme. Turn it on and the App provides you with a grayed out move-able palm protected area that moves down the page as your Inking moves line to line. It works reasonably well, but for my purposes it still forces me to think about it too much. The action of laying down the Ink is not as smooth as in Penultimate or in Noteshelf, and that’s a drawback for me as well. That said, Notes Plus allows you to insert audio in a OneNote like fashion and for many that will be a plus. It also has Google Docs integration, different paper selection, and shape detection. But Notes Plus isn’t for me given my criteria. The Inking just feels a little too ragged, regardless of the stylus I use.

Noteshelf approaches Palm Protection in a similar way, yet differently. You have the same move-able area without the grayed out indicator. Instead a small red arrow moves down the screen as you Ink. But what attracts me to Noteshelf is how smooth the Digital Inking is. It is the closest to the Tablet PC experience I’ve seen on any of these iPad Apps. In fact, it is better than Penultimate, which so far has been the best experience for me. Noteshelf has an interesting omission. It does not allow you to type in text in this version. You can lay down Ink, insert a picture, but you can’t type text. So, you’re going to be Inking if you use Noteshelf. Do note that the developers recommend that you do all of your Digital Inking in portrait mode. The one huge downside that Noteshelf has is its export function. You email a page a page as an image or a PDF, or use the cumbersome iTunes process of transferring an entire notebook when you sync. I’d love to see these Apps work with the Dropbox API. Another iPad Inking App Noterize does this very well.

Again, this is all going to be a very personal thing for any Digital Inker. I can’t blame any Tablet PC user who looks askance at the iPad or any capacitive slate form factor when it comes down to it. But as I say in the InkShow, the continued development for Inking Apps on the iPad is encouraging to me. The lighter form factor just feels right for an Inking solution. Given that Windows 7 already has Microsoft’s Inking baked in, we won’t be seeing any third party improvement there in my opinion, and the success on Windows 7 Slates is going to depend on the digitizer choice, how that integrates with Windows, and the stylus.

UPDATE: Not sure this is really an update as I’m adding it before this post is published. The Inking App I’ve been using most, Penultimate released an update (v 2.1) that makes the fine pen (you have three pen choices) “thinner, smoother, and more natural looking.” The other two pens have been improved as well and the undo feature for each page is now persistent as long as the App remains open. From my very early looks at the updated version the claims are justified. Too bad this came out after I filmed the InkShow. This just proves my point (or is that a theory?) that these Digital Inking App developers are working very hard to create a very good Inking experience on the iPad. Here’s hoping the competition keeps on rolling.

All GBM InkShows are sponsored by MobileDemand