Sharing video taken from the HTC Flyer is all well and good, but I’d be remiss if I didn’t share video of the device as well. In this InkShow, I run through the special pen features of the Flyer. Yes, it’s an InkShow that shows ink! Plus: bonus commentary.

Click here for the iPhone/iPad friendly m4v videos in SD and HD 720 formats. 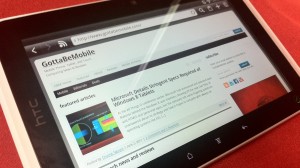 In the video, I describe the pen features of the Flyer as “limited” but that’s not the most precise word for it. It’s more of a “focused” experience that treats the pen as a pen you’d use on paper, not as an all-purpose pointing device on a computer. Furthermore, as previously reported, HTC plans to open their software to developers, including an SDK for pen input and APIs for their Scribe software. While HTC’s current pen features are limited in number, the potential for expansion once they open their software is vast.

A commenter named Mark (not me) tipped me off in my “Inking Experience” post to this Easter Egg: the top end of the pen works as a capacitive stylus. The pen body is metallic and able to conduct electricity between your hand and the screen. So while the pen tip activates the pen features of the Flyer, the other end triggers the screen as if it was your finger. Not exactly a feature so much as a fun find, but if you really like stylus control, HTC’s magic pen has you covered.