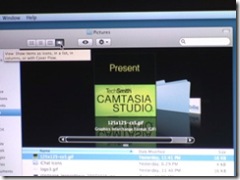 Apple Tablet PC rumors have been brewing for years, but they have hit their peak over the past several months with hints that Apple has something in the works, and the latest rumblings about Asus confirming that Apple is working on something. Whether it is touch or touch + ink or nothing at all remains to be seen.

That said, Warner posed an interesting question to me several weeks back wondering if Leopard was poised for touch, and how the current features “stack” up. Having been a Mac user for quite some time, I thought it would be fun to take a look at some of the things Apple is doing with Leopard that just might show where they could be headed. Also in that light, I take a look at some user experience issues that would need some serious attention if touch were enabled on Leopard. It goes without saying that if Apple were ever going to do touch on a MacBook, it would need to be optimized in some major areas.

I don’t “touch” on InkWell in this InkShow since I don’t have a Wacom tablet, but based on this video from Loren Heiny, a lot of work would need to be done in the recognition and 3rd party software department,too.  Microsoft holds a tremendous lead over Apple in the whole recognition area, so it wouldn’t surprise me to see Apple leave InkWell alone, and soley concentrate on optimizing the touch experience.