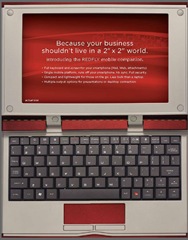 As the final installment in this series, I’ll take a look at the target markets, availability, and my first impressions of the Celio REDFLY usage concept.

As previously mentioned, the REDFLY is not being initially targeted at consumers. The targets are vertical markets and businesses. Considering the price point of $499, this target is necessary, since most consumers won’t spend that kind of money on something that doesn’t even have a processor.

To be fair, though, this strategy also makes sense based on the usage models, covered in Part 2 of this series. Most of the applications available for the Windows Mobile phone are more oriented towards business users, like email and office applications. Sure, consumers use those functions also, but they’re more likely to just buy another device. Consumers don’t worry about the technical support aspects of computer hardware.

Businesses base decisions on Total Cost of Ownership (TCO). If the TCO is lower, it’s a buy decision. As businesses become increasingly mobile, laptop computers have become popular, but the TCO of a laptop is typically higher and they have a shorter life span, typically because most laptops need upgrading for newer software requirements. (How many people will buy new systems for Vista?) Since the REDFLY doesn’t require IT departments to learn how to support yet another system, Celio says it is becoming a popular option for mobile professionals. They can have a much larger, more powerful system on their desktop while taking this highly portable solution with them. While the system on the desk is still likely to be a laptop, by buying a “desktop replacement” system, that laptop can have a longer life span, more computing power, and lower cost than an ultra portable system. Even when adding in the $499 for getting a REDFLY, it could still add up to about the same cost.

And that’s in addition to all of those places where PDAs are used currently as the primary input method. Many vertical markets already use a Windows Mobile based solution for simple data collection and entry. In those situations, the functionality of the Windows Mobile device could be greatly enhanced by the REDFLY. With the 8 hour battery life, this could be a solution for many mobile workers who don’t have or need the full computing power of a PC.

In both situations, the REDFLY can also be seen as a lower security risk. Since no data is stored on the device, if the unit is lost, stolen, or broken, the only business cost is replacement, not the real damage of lost data.

The REDFLY will launch in March. It’s going to be primarily sold through integrators and resellers, although Celio says they’re in talks with major cell phone carriers about making it available through the carrier’s business to business unit. Just don’t expect to see these at the AT&T Store any time soon. The B2B products are not generally carried in the retail stores.

Despite being an attractive device, I think the REDFLY will be largely ignored by consumers at first. This is okay, given the price point and sales strategy, because I can also see where they’ll have sufficient sales in specific vertical markets to keep the business in the black. I suspect that this will remain a business class device for a couple of years and start to migrate into the high end consumer space at that point, due to lower prices and a larger install base of Windows Mobile devices.

The interesting question is how this plays against UMPCs and MIDs. That same couple of years will also see the launch of the MIDs and the announcement of products based on Moorestown. Currently Moorestown devices are targeted to be very small, possibly even competing against cell phones for pocket space. I could see where the REDFLY concept – larger screen, keyboard and battery – could be extended to include MIDs. How about a nicer screen and keyboard for your MID, but only when you want it? It seems like Celio Corp could be well positioned to be a leader in a potential emerging market in the next 2-4 years.

Overall, I really, really want to try it out. Luckily I will get that opportunity soon, and when I do, you can expect to see an InkShow on it. I suspect that it could fill a niche in my mobile strategy, but we’ll see once I can get my hand on it. In the end, the real test of any new technology like this is how well it works. No matter how attractive the packaging or concepts, it has to fulfill its promise. Once I can try it out, I’ll know better whether I think its a winner or not. Right now, I’m cautiously optimistic.