GBM Shortcut: Checking Out Google Chrome on a Tablet

GBM Shortcut: A Day in the Sun with the HP Elitebook 2760p 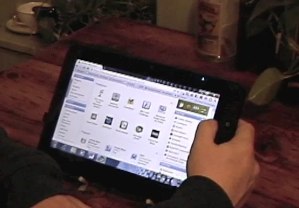 I’ve seen some pretty interesting commentary and critiques of the Google Chrome OS since it has been released. Xavier has done a good job of filling us in on his thoughts about what he’s experiencing with both the OS itself and the prototype hardware Google is now sending out for testing. (see here, here, here, and here.) Some, like the creator of GMail think Chrome OS is doomed, some are spending way too much time talking about the hardware in my view. Some see Chrome OS as a big boon for anyone who wants to save some costs when doing computing.

Me? As I’ve already said, I think it is too early to tell but I’m guessing Google is making a play for both the Enterprise market on one end and the lower end markets (like the third world) on the other. The broad middle is where the questions really are. As I said earlier, you can essentially get all the functionality out of the Chrome browser that you can with what we know presently about the Chrome OS. Actually you can get more if you’re running it on an existing PC like a Windows or Mac machine. In my view, far too many folks in that broad middle are going to settle on just such a solution as an option so that they have more flexibility for their computing needs. But those pages are yet to be written. I think the real question about Chrome OS is going to center not only on this broad middle sector but also on how well it might work on mobile devices like a Tablet. Or is that for Android? Or is that just too touchy a question for anyone to answer right now?

For what is worth in a debate that is just beginning here’s a look at how the Chrome browser with the Google Web App Store works on a Windows 7 Tablet. As you can see you’ve can run the same Apps and extensions that you can in a standalone Chrome OS installation.