Gears of War HD Remaster Leaks Ahead of Reveal

Microsoft, makers of the Xbox One entertainment console and dozens of different video game franchises, will have one less game to stun users with at its E3 2015 Media Briefing. Leaked video indicates that Microsoft is planning to reveal a remastered edition of its first Gears of War game for the Xbox 360.

Video of a Gears of War HD Remaster surfaced this week on XboxDVR. XboxDVR is a third-party companion site that connects to Microsoft’s Xbox Live service so that users can easily get their pictures and video out of the service for posting and editing. Though XboxDVR isn’t directly affiliated with Microsoft, the videos it houses are available directly from the service itself, meaning it’s unlikely that the video came from anywhere else but Xbox Live. Unfortunately, the original videos were pulled from Xbox Live a short while ago. 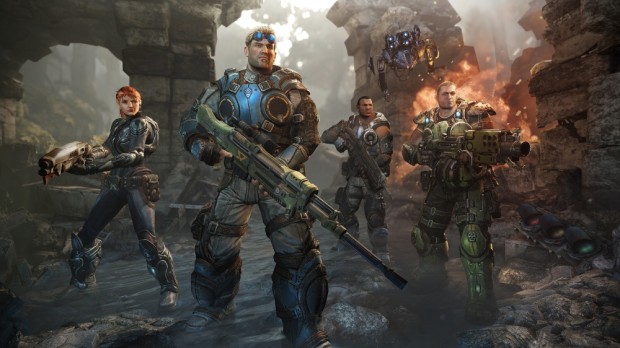 Gears of War Judgement was the last game in the Gears of War franchise to be developed in partnership with Epic Games.

In the videos we see enhanced lightning and better textures applied to Gears of War, the original version of the shooter that first launched on the Xbox 360. Those details match what rumors indicated gamers could expect from a Gears of War HD Remaster. Allegedly, the game is running in high-definition at 60 frames per second, which is pretty smooth. Reportedly, there’s also upgraded cut-scenes and pre-rendered video, according to GameSpot. Currently, only the Xbox One and PCs running early versions of Windows 10 can store video clips and screenshots on Xbox Live. As such, the Gears of War HD Remaster has to be coming to either platform or both.

The Gears of War series focuses on Marcus Fenix as he and his team take on a band of creatures set on destroying humanity.

The first Gears of War game launched in 2006 to lots of fanfare. After Halo, Gears of War is Microsoft’s biggest exclusive shooter. Instead of the first-person camera angles from Halo, Gears of War players get to see themselves in the world as they move around. It hasn’t quite been 10 years since the series first game launched, but it’s believed Microsoft is gearing up for a push now because it has a new Gears of War title in the works specifically made for the Xbox One in the relatively near future. Releasing a Gears of War HD Remaster for the Xbox One gives Microsoft the opportunity to introduce the franchise to a new generation that maybe never experienced the original slate of games.

Microsoft used a similar strategy for Halo. This year’s Halo 5: Guardians is the first time Microsoft has created a first-person shooter game in the series specifically for the Xbox One. Microsoft prepped its community for the game last year with Halo: The Master Chief Collection. The Master Chief Collection included every single game in the series to feature main protagonist John 117. Games in the franchise that weren’t available in HD already were upgraded. Halo 2 specifically included new cut scenes and improved animation.

Epic Games, which then owned the rights to Gears of War finished wrapped up the franchises main trilogy back in 2011. Black Tusk, a relatively new studio created by Microsoft, now manages the Gears of War franchise. At the helm of the franchise is Rod Fergusson, the franchise’s original leader from Epic Games.

The last Gears of War game to launch was Gears of War Judgment. Unfortunately, reviews of it were more mixed than previous titles in the series. If Gears of War HD Remaster is as far in development as what’s indicated in these videos then we’ll almost certainly hear about the game during it’s E3 2015 Media Briefing happening on June 15th. Microsoft plans to broadcast its announcements to Xbox One, Windows Phone and Xbox 360 users through its Live Event Player. Additionally, live video from the briefing will air on Spike TV.