As a professor who is constantly going back and telling students what I have already told them in a lecture I was excited to see the Geek Squad Backpack commercial, which shows a student taking notes with his computer’s built-in microphone, automatically transcribing the professor’s speech into text.

While I was looking for the software which would let students, “take notes while conserving energy,” instead of mashing on a keyboard like a two year old trying to pull up more Dora, I was disappointed to find out that Geek Squad is apparently doing the impossible.

The speech to text software being used by our long haired “master of the study group,” is Dragon Naturally Speaking. The software lets you dictate to your computer and even update social networks just by talking. The catch is, You need to train the software, use a high quality microphone and correct mistakes.

Unless Joe College was able to convince his professor to train the software and there is a hidden high end mic somewhere in this video we can’t see, or you get a Geek to come take your notes, Geek Squad get’s an F on this one. 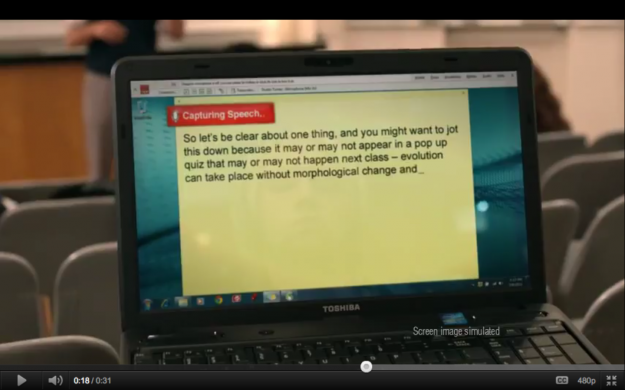 The bad news is that we don’t know of a speech to text tool that works as well as Best Buy claims their Geek Squad can install, but there are still better ways to take notes. Two favorites among my students are LiveScribe and Evernote.

Evernote is a free note taking application which works on your smartphone, tablet and notebook. You can type your notes, add pictures and record audio while the lecture is happening. The iPad or Android tablet version may be best suited for the classroom, but notebooks will work just as well.

LiveScribe is a pen that records audio as you write notes. This smartpen allows you to call up the audio just by tapping next to what you were writing a at the time. One of my student’s showed me his notes and audio taken with the pen and I was quite impressed with the ease of use and quality of the audio.

The good news is that the rest of the tech shown off in the commercial is legit, and you can get it without paying $99 a year for Geek Squad support. Here are the devices and technology included in the Geek Squad Backpack commercial.

Before you pay for tech support from Geek Squad, make sure you can’t get the support you need from your school. When you go for orientation, ask about tech support options. While some schools have cut free student tech support there are still many universities which will help you get your notebook fixed if something goes wrong.