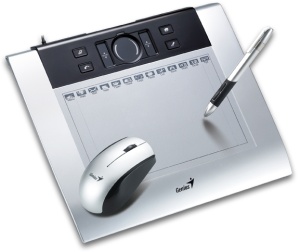 Genius, one of the other pen tablet makers, has launched a couple of new models of their MousePen tablets: the M508 with switchable 16:10/4:3 aspect ratio and the wireless M508W.

The M508 features a 5″ x 8″ working area, which is smaller than previous models, but offers the ability to switch between a wide working area of 16:10 aspect and a narrower one of 4:3, which will be useful if you work on different monitors or still use one that’s 4:3. Resolution is 4000LPI and pressure sensitivity is 1024 levels. It includes 13 programmable buttons, as well as a touchpad for scroll, zoom, and brush functions. Input is via the included pen or mouse that only works on the tablet area. 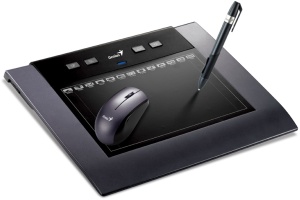 The wireless M508W features the same switchable working area, resolution, sensitivity and button options in a sleeker design minus the touchpad. Its defining feature is a wireless connection to the computer via a 2.4GHz USB dongle. The tablet runs on two AA batteries, while the pen and mouse use a total of three AAA batteries, presumably split one and two, respectively.

Prices are $149 for the M508 and $199 for the M508W. While very affordable compared to Wacom’s high-end offerings, they do come up short on the specs (and there’s the extra weight of the battery in the pen to contend with).