Users looking for a decent smartphone without an exorbitant price or two-year service agreement might want to get their wallets ready for next week. Tiger Direct will mark down the cost of the Lumia 520, Nokia’s low-end smartphone running Windows Phone 8, to an astonishing $59.99. That’s on top of steep discounts for other high-end smartphones with a two-year contract.

News of the deal surfaced today as TigerDirect published its ad for next Black Friday, the day after Thanksgiving in the United States. If the ad is to be believed, the only downside is that the outlet won’t offer the Nokia Lumia 521 at the same price as well. As the Lumia 520 locked  to AT&T’s GoPhone prepaid service, users on T-Mobile may have trouble using the device on the carrier’s HSDPA data network.

Though cheap, The Nokia Lumia 520 is actually Nokia’s most popular Windows Phone to date. It’s particularly a best seller in countries where entering into two-year service agreements to buy discounted smartphones aren’t the norm. 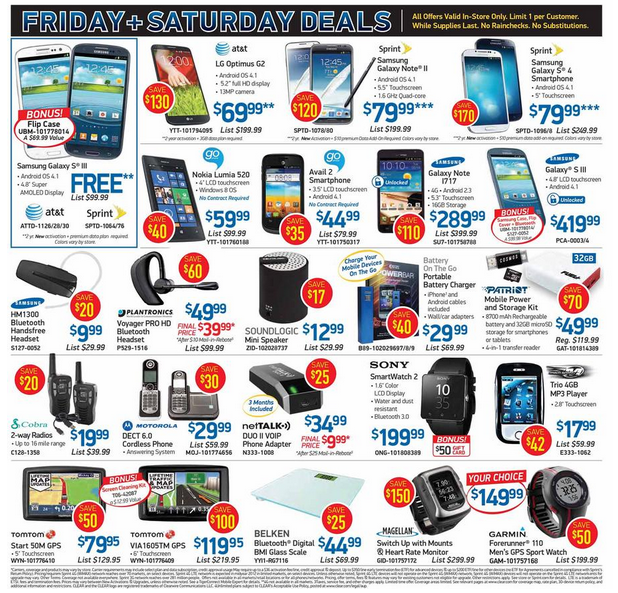 Users do get a pretty decent device for the price. The Nokia Lumia 520 features a 4-inch IPS display, with a 5 megapixel rear-facing camera and a Snapdragon S4 processor. Of course, Nokia did have to cut a few corners to get the device’s price down. The Lumia 520 is missing a front-facing camera, Nokia’s PureView imaging technology and a camera flash. It also can’t connect to LTE data networks, and it only comes equipped with 8GB of on-board storage. Users can add more using a built-in SD card slot.

All told, it’s not a bad phone for shoppers looking for their first smartphone. It’s also great for teens who aren’t necessarily ready for a more expensive handset.

Interestingly enough, the ad also lists the AT&T version of the LG G2 for $69.99. The LG G2 only debuted in November. As such, it features Qualcomm’s 2.3 GHz quad-core Snapdragon 800 processor and a 13 megapixel rear-facing camera.

TigerDirect’s Black Friday sales start next Friday and ends on Saturday. Customers are only allowed to purchase one of each item.