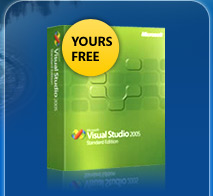 If you are looking to get in to that CodeProject.com Mobile PC contest I posted about earlier, but need a developer toolset to code against – here is your opportunity.

Microsoft is sponsoring a Visual Basic Labcast and they are giving away a copy of Visual Studio 2005 Standard Edition ( value estimated at $299 ) to everyone who completes two Labcast sessions and submits evaluation surveys. In addition to receiving Visual Studio 2005 Standard Edition, Labcast participants will be eligible for one or more of the following:

So, with a developers contest in process, some free software to help you get started developing that cool mobile pc app, and some ideas for apps already generated, there shouldn’t be anything holding you back, right? Well, get down to coding and put some great apps in to the mobile pc space, k?