As I continue my review of the GETAC/TabletKiosk G840XT, this post is going to focus on the integrated GPS reciever that is built into the unit.  Though we had some initial doubts, the GPS proved to be a solid performer for data collection while being tested out in the field.

Normally when out in the field we are using a Total Station or a Trimble GeoXT GPS unit. Most of my experience has been with the GeoXT unit, so that is what we will be comparing for now. The Trimble GeoXT unit has an accuracy rating of Ã¢â‚¬Ëœsub meter’ and after post processing one can get some really accurate results. As always, the more satellites the unit can see, the better the results. The GeoXT is built for accurate data collection so there is a large antenna right on the top of the unit so it can see as many satellites as possible.

Like I said in my initial post, we were a bit worried when we first started thinking about using the GPS unit inside the G840XT. Built in system with no external antenna Ã¢â‚¬” we thought the reception was going to be unusable. In my previous tests while filming the InkShow, I was on the move and it did a good job while walking around. This test was going to be taking points while standing still, so the fix was hopefully going to be much better. 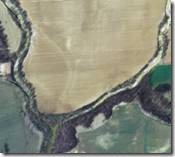 Since the G840XT was just a trial run for us, we had both units out in the field. The real work was done on the GeoXT and the GETAC with a custom application running was an innocent bystander. The performance of the GETAC was surprising as we started collecting at each site. When looking at the screen, our location on screen was showing up almost spot on where it was supposed to be on the aerial photos. As we were collecting data, the point locations form this little PC were amazingly accurate.  Then once we started comparing the data back in the office to the points collected by the GeoXT we were even more suprised. I wouldn’t go so far as saying it would replace the GeoXT, but for a full featured, rugged, full Windows running PC it is a very good option. Plus, the bigger screen allows for more data to be seen from the surrounding area, giving an almost Ã¢â‚¬Ëœin field’ analysis.  For example, If we see an area with lots of collected items within one grid, we can assume we are going to find adjoining items in an adjoining grid before we even get there.

After looking at all of the points and comparing them with the sub meter GeoXT, we were surprised that the overall accuracy was within an average of 3 feet from the true location on the ground. Some were well off and those skewed the results, but most were within an acceptable range. There are 2 things to mention here though Ã¢â‚¬” 1. We were in an open field with clear view of the satellites 2. The unit had time to get a good reading while we were taking our actual reading from the GeoXT. These are just factors to be aware of because if you are only using one unit, the acquisition time and PDOP take a some time to provide a good accurate reading.  Since the GETAC was used second, this gave plenty of time for the unit to acquire a good strong signal.

We were very happy with the results of the GPS. I don’t feel it could take the place of the Trimble GPS unit for high accuracy data collection with the hardware setup we had with the G840XT, but if you are looking for an accurate GPS for other types of projects this could be a great unit right out of the box. A couple off the top of my head would be:

Note: Tests and situations vary, these are my results and yours may vary in accuracy.