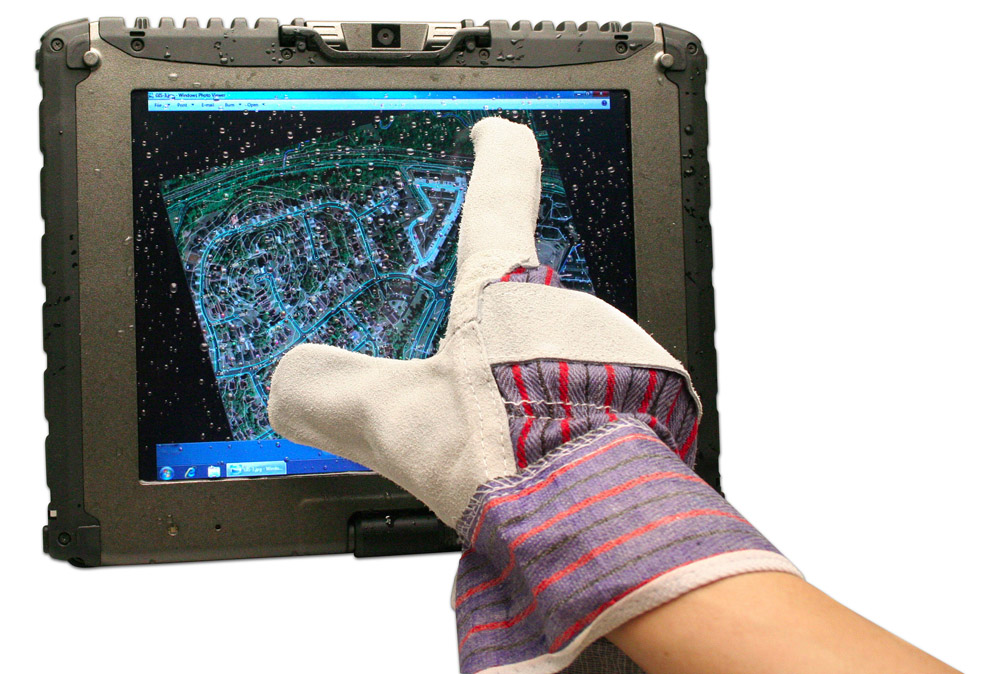 Getac’s new V100 Tablet PC is the first ruggedized PC with a multi-touch display that will work with gloved hands. The Getac V100 uses a resistive touch display to make this magic happen.

This feature should be popular amongst users that work in cold environments or in dangerous conditions. Some job sites require workers to wear gloves at all times for their own safety.

The Getac V100 Tablet PC with multi-touch will be available with Windows 7 later this month.

New Technology Allows Touch-Screen Gestures to Move and Edit Documents; Navigate Files and System Applications in the Most Extreme Environments

LAKE FOREST, CA. October 7, 2009 — Getac Inc., a leading innovator and manufacturer of rugged computers that meet the demands of field-based applications, announced that its line of rugged Tablet PCs will be the first rugged computers to offer a Multi-Touch screen for use with or without gloves. Having Multi-Touch technology on Getac’s V100 Tablet PC will allow users to move and edit documents, rotate maps and photos, zoom in and zoom out the maintenance manuals, and navigate numerous system applications by using a series of “gestures” with their fingers.

The new Multi-Touch technology uses a series of single touch, dual touch, “flick,” and application gestures. Users of Getac’s V100 Tablet PC will now be able to quickly and easily perform numerous on-screen tasks such as move, copy, delete, zoom, and rotate by simply touching the screen and performing the task desired with their fingers. Getac’s Resistive Multi-Touch technology is not based on capacitance sensitivity, which means users can perform these actions, and many others while wearing protective gloves. This makes it ideal for industrial and field professionals who work with dangerous chemicals or perform their job in extreme weather conditions. Even with gloves, the sensitivity and accuracy of the multi-touch screen is extremely high. The screen features 2048×2048 resolution, 100 points per second report rate, and less than 35ms response time.

“Our customers work in some of the most extreme environments and weather conditions where touch screen technology and flick gestures are faster, safer, and more convenient than using a keypad,” says Jim Rimay, president, Getac. “As a leading innovator in advanced rugged computer technology, it is only fitting that Getac is the first to offer Multi-Touch technology that can be used with or without gloves,” added Rimay.

Getac’s Multi-Touch technology will also offer complete compatibility with Microsoft’s Windows 7 when it is launched later this month.