Yesterday as Microsoft was launching Windows Phone 8 and Google announced the Nexus 4 and nexus 10 Hurricane Sandy was tearing through the Northeast and I sitting in my home office hoping the lights would stop flickering so I could continue writing in peace.

As I’m writing this my iPhone 5 on Verizon fluctuates from two bars of 1X to No Service every few minutes. A DROID RAZR M review unit I charged just in case is more consistently reporting one bar of 1X. I also have a Samsung Galaxy S III review unit on my desk that reports full bars on AT&T, but because the SIM isn’t provisioned I’m not sure if it actually works. 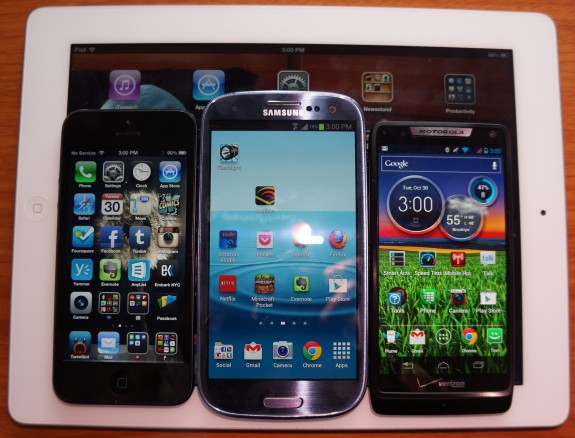 Devices I had charged and ready in case Hurricane Sandy knocked out the power.

The cell networks in Brooklyn make it difficult to contact friends and family through phone calls or SMS, though iMessage and other services that can use Wi-Fi still work fine. It’s frustrating when trying to talk to my family and friends on Long Island who don’t have power, because it’s hard to tell if they get any messages I send.

The last hurricane we had, Irene, made it impossible to use any phone carrier on Long Island. The situation this time was better as Verizon and T-Mobile worked last night when I contacted my family there. I have no idea if any network is working well now, however.

Last night as the storm was in full effect, and I charged my gadgets one last time in case the power went out (including my iPad for reading), my Cablevision Internet connection went down. I switched over to using the 4G LTE hotspot on my iPhone 5, and the speed was fast enough to load a 15-minute 720p video from YouTube with no problems. My connection came back a few minutes later, however, so I had no reason to continue taking up space the 4G LTE network.

During the storm I tried to use my phone as little as possible, but as it got closer to 10 p.m. it was clear out power wasn’t going out. I switched to using Tweetbot and The Weather Channel to keep track of the storm. I also downloaded the Red Cross Hurricane app, but didn’t have to use it at all.

Now that Sandy has all but passed through New York City we’re stuck in our section of Brooklyn for a while until the MTA can clear out the flooding in the subway tubes. That means my fiancée won’t be able to make it into Manhattan for work for a while without trying to navigate what limited bus routes will run in the meantime. For me, it’s more of just a minor inconvenience that means I can’t get to any stores aside from supermarkets.