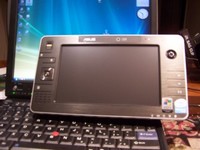 I’ve never had the great desire for touch as an input method the way some have. Since acquiring the PPC 6700, I see the benefits, but honestly, as I was contemplating a UMPC purchase touch was not really one of the features at the top of my list. I knew it would require a lot of adjustments on my part.

I’ve had the Asus R2H in my hands for a few days and have been doing some tweaking and experimenting with touch and other input and navigation issues. I’m still not the greatest fan of touch per se. But having that as an option on this small device is nice to have. That’s the key in my scenario. Having it as an option.

The one thing that worried me about using the Asus R2H, or any touch screen device for that matter, was vectoring or registration issues. Having handled other UMPCs on the market I was not happy with that experience having ink spill all over the place. Without palm rejection or an active digitizer the experience just seemed unworkable. But the Asus R2H is better suited to offer someone who still does a lot of stylus input that option realistically. It is not perfect. I can still get stray ink if I’m not too careful, but I’m able to rest my palm on the screen in both landscape and portrait modes and ink away without too much thinking about it.

That said, the touch option is growing on me in some circumstances. Granted it is still very early in my experience,  but being able to reach out and touch the screen is a good option to have in some circumstances, although we are really going to need more software manufacturers get on the stick and develop software that is touch aware to make this really useful. (Larger buttons, etc…) 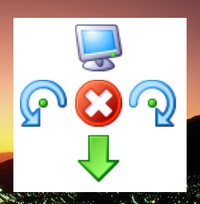 As far as rotation goes, that is a bugaboo with the UMPC with reports of it working or not working. Fortunately with the Asus R2H rotation issues don’t seem to have that issue. If I am in 800×480 resolution I can use URotate for rotation. The Asus command for this is too hidden to be of any practical value. But I do notice that at times, and it is completely random as far as I can tell, that some programs do not consistently display correctly in portrait mode. I haven’t been able to successfully recreate the problem, (of course it only crops up when you don’t want it to) but an example is with OneNote. At times after rotating, the screen is fine and as expected. At other times, the screen is cut off and the bottom half is just not usable at all. Curious.

As for hardware buttons, I really like the way Asus has implemented the hardware button functionality, although being able to program them would be nice. With the exception of the two buttons that pop up Microsofts’ launcher (on the lower left) and Asus’s control utility (on the lower right) that gives you the ability to adjust screen brightness, resolution, etc..) the others are purely for navigation and mouse input and they can come in quite handy. It took me much less time to adjust to them then it did on other UMPCs. Although I expect the hook ins that allow the Asus utility to be so functional eat up a lot of system processes, it is handy to have given the fact that to access controls in some software you have to switch resolutions. I need to investigate this much more. But one thing that the larger graphical representation of this shows is that for most of my usage I hardly ever have to have the screen at full brightness. That’s good to know. I really like the screen.

Of course the other input method is with the stylus. The one that comes with the R2H is a small stylus and it is ok, not great, but then no small stylus is great in my opinion. It is expandable as are many of the smaller styli. But be careful with the end of it (not the writing tip) that you pull it out of its garage with. After use this rubberized end will begin to unscrew a bit and if you aren’t careful it can come off. Perhaps it is the one I have, but I find myself having to retighten it once or twice a day so far. It would also be nice if that rubberized end was a different color than the other bumpers that are designed to keep the R2H from skidding when laying flat.

Other input methods to investigate further: