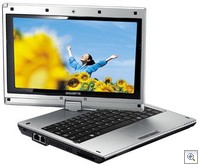 OK, it ought to be obvious by now, but my brain is swimming. As if the name game thing wasn’t crazy enough, comes this headline from good friend Steve “Chippy” Paine at UMPCPortal: GigaByte M912 Convertible Tablet. Bringing UMPC Features to the NetBook Market. UMPC? NetBook? Tablet? I’m starting to wonder if anybody can figure this out.

That said, the GigaByte M912 certainly looks intriguing with that swivel screen at 8.9 inches and a 1280×768 display. It is supposed to be running Intel’s Atom processor. But as Kevin Tofel points out there are some interesting things going on here regarding calling this a Tablet PC or for that matter a ULCPC. Microsoft’s plan to get their foot in the door in this wacky market is to offer XP (Home Edition) as the OS, but with a few catches.

If you look at the specs on Engadget (and granted it is still early, as I don’t think this has been officially announced yet) you’ll see that the M912 fits the screen specs, doesn’t seem to have a qualifying HD option, and it does have a touch screen. So, I’m just asking here. What good does that swivel screen do if it isn’t a touch or Tablet PC screen?

And you wonder why I’m having a hard time keeping track of all of this.