With Microsoft’s Xbox on Windows 10 app just days away from arriving on user’s PCs, video game developer Motiga is filling in some Gigantic release date details and being transparent about the details it isn’t sure about just yet.

Motiga shared some candid Gigantic release details late last week in an interview with GeekWire, a website that focuses on news and technology information in the Seattle area where the studio is based. Microsoft revealed that Gigantic would be among the first PC games available this year directly through its Windows Store. The team shooter will act as launch window game for Xbox on Windows; Microsoft is fully extending its Xbox Live platform to Windows notebooks, desktops and tablets with the Windows 10 release. 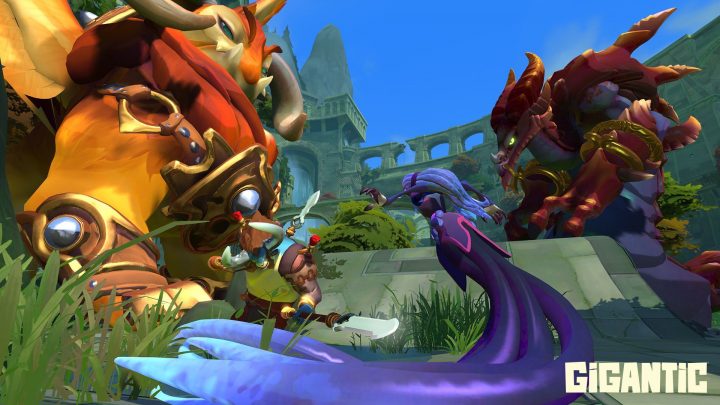 Read: All My Favorite Xbox Gaming Features in Windows 10

Gigantic is a shooter that lets users team up to take on other online players. While working together with their team, players also have to protect a giant robot. It’s that robot that gives Gigantic its name.

On Gigantic release day PC users will be able to play their counterparts online over Xbox Live. This is the first time that’s been something users could do. Understandably, the feature has gamers on both platforms nervous. Motiga’s President of Publishing, David Reid, says that the company doesn’t know which platform the experience will be better on. “We’re really not sure who is going to be better,” he tells GeekWire.

Motiga is working to ensure a great Gigantic release day experience for users nervous about the platform combination. Xbox One and Windows 10 users won’t be get paired together if they don’t want to. The developer says that there’ll be an option to turn the feature on. That does make the feature less seamless. Xbox One and Windows 10 users playing with each other won’t get ranked matches either.

Right now the game developer is working on solving problems that only come when working with two very different platforms. In particular, the report calls out menus which, will need to be different on each version to better take advantage of their unique features. Looking and interacting with a menu on the Xbox One tends to involve more horizontal scrolling and bigger text since televisions are larger and often farther away. It’s exactly the opposite for the PC, which is often a foot or so away from the user. This is a problem Motiga is working on.

Right now, Motiga is only saying that the Gigantic release date is coming sometime this calendar year. Theoretically, that means users won’t be able to download the game on Windows 10 release day later this week.

Xbox really is one of the highlights of the free Windows 10 upgrade. For years Microsoft treated its Windows operating system as a gaming afterthought. Through DirectX the company worked hard to make sure games could be played on the platform, but completely left the logical next steps to other companies. It’s Games for Windows Live initiative failed to catch on twice. The Games app it added in Windows 10 was built around mobile games, not traditional PC games.

Xbox on Windows gets the balance right. It incorporates both mobile and traditional PC games. New games – complete with Xbox Live achievements – are available directly from the Windows Store. PC gamers can record video and take screenshots directly from their games. Everything that can be done with an Xbox One is possible through this new Xbox app for Windows 10. A few weeks ago the company added Xbox Live parties so that players can chat with each other across Xbox Live, regardless of which device they own.

Microsoft has a launch game of its own for Windows 10. Called Fable Legends, it’s also set to debut sometime this calendar year.