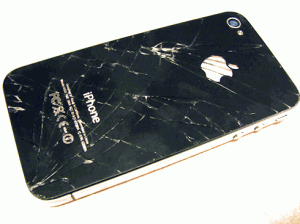 Ryan Block of GDGT has opened up a giant gaping wound for Apple. In a post, When Antennagate is over, is Glassgate next for the iPhone 4, Ryan says that he has info that Apple is very worried that slip on cases can lead to that glass back on the iPhone 4 being cracked. Apparently Apple was so worried they but a block on slip on cases being sold and has opened up a lab to study the problem.

The issue seems to be that particles might be on the glass and the pressure caused when the case is slipped on can lead to breakage (glass is fragile after all) that might not even be seen until the case is taken off.

Apple may or may not have a major issue on its hands if this is indeed the case. It certainly smells like another PR problem given all the coverage of Block’s post. But the real issue points to the core of Apple’s design aesthetic. Apple makes pretty devices, but in my view the iPhone 4 is a disaster waiting to happen if you don’t have a case. I still wonder why so much effort is put into designing something that out of the box looks and feels so attractive, but immediately sends you searching for protection that hides all of the aspects of the design. Of course one answer for that is the hoped for one year life span of these devices (from the manufacturer’s perspective). I’m not arguing for ugly devices here because design is important. But in many ways when a company (not just Apple) talks about how beautiful a device is on launch, they are really condescending to the consumer knowing full well that all that design effort is going to be obscured by third party cases. Of course we all fall for it.

Intriguingly, I’ve always thought that the iPhone 4’s glass back was a test to see how well it holds up so that Apple can use some of those patents for a dual surface touch interface that we’ve seen in the past.