Forget taking your tablet along with your for a long car ride, how about using the actual windows of your car like a tablet? Sounds like something out of a movie right?

For now, it is, but if General Motors Research and Development and students from the FUTURE LAB at Bezalel Academy of Art and Design in Israel have anything to say about it, we might just start seeing this technology show up in real-life sooner than later.

GM tasked the students with building a concept that would allow for backseat passengers, they say kids but I think we can all agree that people of any age would enjoy this technology, to better enjoy the time spent on the road.

And thus, the Windows of Opportunity Project, known by its acronym, WOO, was born. 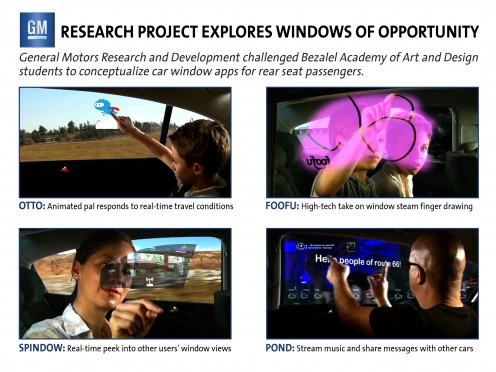 The project called for the students to “turn car windows into interactive displays capable of stimulating awareness, nurturing curiosity and encouraging a stronger connection with the world outside the vehicle.”

Advanced windows that are capable of responding to vehicle speed and location could augment real world views with interactive enhancements to provide entertainment and educational value.

Unfortunately, GM has no immediate plans to put this kind of technology into production models of cars. But, that being said, it did allow for the students to get creative with their applications since there are no limitations.

Here is what they came up with:

Yeah, just a bit cooler than the small television screens that some cars currently boast inside the cabin. And lucky for us, the students were able to create a full-functioning prototype to show off these applications, which you can see in the video.

We might be a ways off from seeing these things on the road, but boy, does the future look bright.