Today Google released a new version of its Gmail app for iPhone with a new design and the ability to add multiple accounts.

The new Gmail app follows the same design language as Google Now and the new Google Search app for iPhone, replacing the out-of-place design of the previous app. Gmail 2.0 lets users add up to five Gmail accounts to the app, though like the Gmail app on Android there’s no unified inbox in the app.

With Gmail 2.0 users also get improved search and continuous scrolling for those with a lot of email in their inbox. Overall the app seems to take many of the great features from Sparrow, though it’s not clear if the Sparrow team worked on the app. 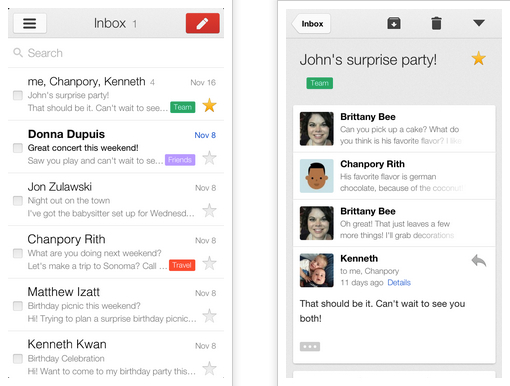 Avid Gmail users will appreciate the support for folders as well as priority inbox in the new iPhone and iPad app. Users who don’t use folders or priority inbox can easily ignore them, but the option is always there.

Gmail 2.0 also integrates with other Google services. Users can RSVP to events on Google Calendar straight from the app, as well as +1 and comment on Google+ posts without leaving the app. Google included a built-in web browser for emails with links, but it also included an option to open those links in Google Chrome if its installed on the device.

The new Gmail app isn’t for everyone because it doesn’t support accounts from other email services. iPhone users who rely on Gmail and other Google services will appreciate the app, however. The app brings the best parts of Gmail for Android to the iPhone, which for some users was the only drawback of iOS.