Google announced and released a brand new Gmail for Android today with tons of new features that users have been requesting for some time, and one in particular could come in handy this holiday season.

The new Gmail version 4.7 is available now and rolling out in stages to all Android users, and Google’s added tons of features that should have been available years ago. The biggest feature is Vacation Responder, as a quick way to set an instant reply and “out of office” type of response for all incoming emails. No this isn’t anything new, but now you can do it right from your mobile Android device, rather than on the web only.

Those in a scramble to get all the holiday presents wrapped and squared away before a Chrismas vacation who manage to forget to set a vacation reminder on their Gmail will now be able to do so right from their Android device. We’ve been waiting for this feature for months and months, and it’s finally available.

Google’s also made some huge changes to printing and file attachments that should have many users excited as well. Cloud printing is now a default feature with Android 4.4 KitKat, and as a result, it’s also integrated into Gmail. A quick tap on settings will bring up the print button for those printing on the go. It’s a mobile world, we just live in it. 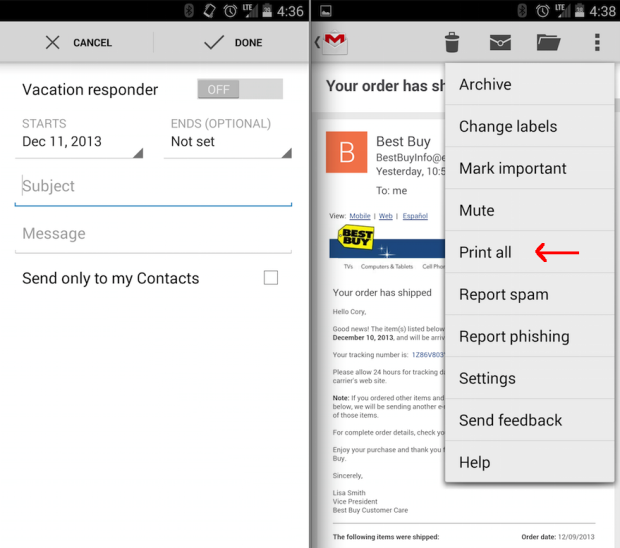 Then the other most requested and important feature arriving with Gmail 4.7 today is improvements to file attachments, and what it supports. Previously Gmail only allowed a few attachments like photos and video, but now you can attach anything under 25MB. Users will be able to send attachments of documents, PDFs, zip files — of any type all on the go. This also means you can send and open APKs for apps.

Last but certainly not least Google announced that this new version of Gmail will have major changes under the hood that will greatly improve performance on older or budget friendly devices. Low memory devices should be able to better handle this latest version of Gmail, and thus improve the overall experience for older 512MB smartphones. The same improvements were also made with Android 4.4 KitKat, so it’s clear Google is focusing on the low end, now that the high end runs like butter on Android smartphones and tablets.

The new Gmail for Android is available now at the Google Play Store.