Gmail has been a core part of the Android experience, and one of the biggest reasons it has been hard for me to make the switch to the iPhone 4S.

For everything the iPhone does better than Android, Gmail is not on the list. While I am enjoying the no email notification life, I still miss the Gmail App.

But, that may soon change. MG Siegler reports that a native Gmail app for the iPhone is in the works, and may already be submitted to Apple for approval.

This is awesome news to Gmail addicts like myself. Users who rely on Priority Inbox, starring and a seamless experience to be productive. The need to check Gmail in Safari for anything resembling a Gmail experience is my biggest disappointment with owning an iPhone.

MG notes that despite a poor track record with iPhone apps, Google has nailed it this time. Even if the Gmail for iPhone app only includes a real app with Priority Inbox, and leaves off the new contact cards and Google+ integration.

Why I’m So Excited About Gmail for iPhone 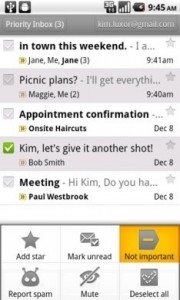 What Gmail for iPhone Could Be

Web Apps Still Suck — using the Gmail web interface sucks compared to the native app on Android. The interface is crammed into Safari, and if you scroll to much in the wrong area, you’ll find yourself in a whole new menu.

If you haven’t caught on yet, Priority Inbox is the reason so many Gmail users are excited about a native Gmail app for the iPhone, and why so many of us put up with a lackluster web app.

If you haven’t experienced the joy of an inbox that knows what is important and what isn’t, you don’t know what you are missing.

When I recently asked Twitter followers how they survived on the iPhone without Priority Inbox, I was surprised be the number of people who acted like I was speaking gibberish, insinuating that the iPhone didn’t need this support because Gmail isn’t used by many employers or by enough end users.

Let me put it this way. You know how exciting it is to see Siri handle mundane tasks at your request? OK, now imagine Siri on steroids, sitting in your inbox moving the most important messages you get to the top of your inbox with mind blowing accuracy. Yes, Priority Inbox is that good.