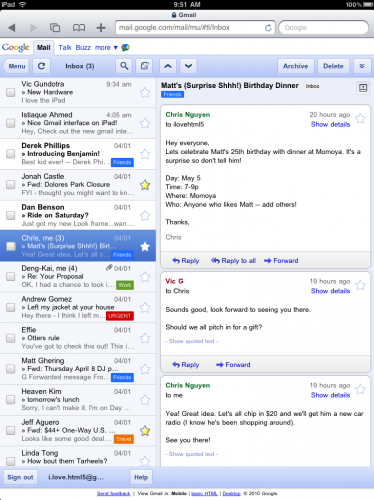 Not one to be left behind, Google is staying a step ahead by reformatting their Gmail and other interfaces for the iPad and tablet computers. Or so they say. Their screenshot of Gmail on an iPad looks pretty slick, but using it on my Tablet PC requires a bit of tweaking and isn’t so hot.

The problems are two-fold. First, the interface is designed specifically for the iPad and presumably other WebKit-based browsers with a larger screen and touch interface, as we might expect on tablets running Android or Chrome OS. Second, Google only serves up the interface when an iPad (and again, presumably a tablet running Android or Chrome OS) is detected as the viewing device. This means it won’t show up by default on a Tablet PC because it registers as a standard Windows PC using a desktop-based web browser, nor is it that great when you can get it.

Using a tweak detailed by Lifehacker, I got Gmail’s tablet interface to show up on my tablet in Firefox. It’s also possible to get it in Chrome, but I rely on add-ons in Firefox for pen-friendly navigation. While my add-ons work well enough in the “tablet-friendly” version, there’s nothing particularly exciting about this layout to me. 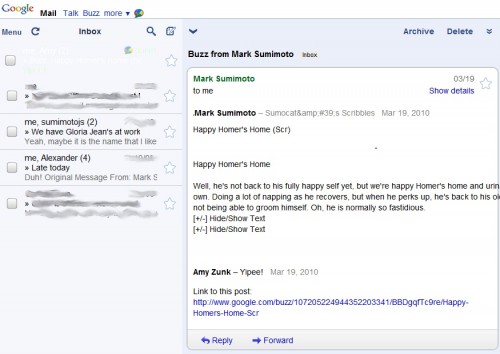 I do like seeing the list and message side-by-side, but that’s a useful feature on any display. The buttons don’t display properly due to the different rendering engine. I appreciate them mentioning “tablet computers” to remind us the iPad isn’t the only one out there, but from the implementation, you’d get the impression the iPad is the only tablet that matters.