The Gmail iPhone app received a nice update today in the form of Google Drive integration, giving the mobile Drive app a new life after the company dropped support for editing a while back.

If you remember from back in May, Google updated its Drive mobile app and got rid of editing abilities, moving that functionality over to new separate Docs and Sheets apps. This left the Drive app as just a simple app for viewing files and other documents, rather than a robust office suite while on the go.

While the app is still like that, it now has a new function thanks to an update to the Gmail iOS app. Gmail users on iPhone and iPad can now attach files to emails directly from Google Drive, as well as save attachments from received emails directly to Google Drive.

This update brings the iOS app up to par with the Android version, as well as the web interface. 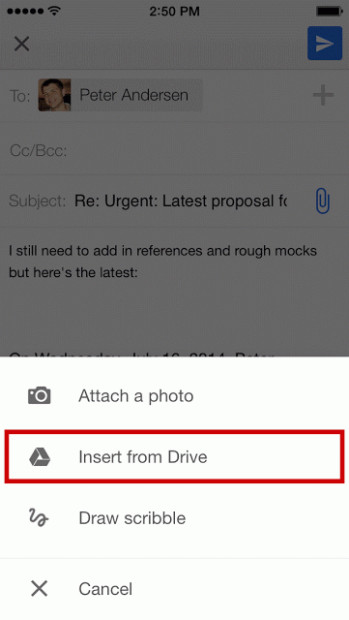 Furthermore, the Gmail and Google Drive apps will also tell you if your file isn’t shared with the person you’re sending it to, allowing you to change the sharing settings before you send it.

Still, the ability of not being able to edit file and documents in the Google Drive app is fairly annoying, and even with the ability to save attachments and add attachments through Drive, it doesn’t the change the fact that you still need separate apps in order to edit those attachments after you save them to your Drive.

In any case, I digress. The Gmail has been one of Google’s most popular iOS apps as of recently, and it’s seen some nice updates several times this year already. Back in March, the app received support for background app refreshing, allowing the Gmail app to check for new emails in the background, that way any new emails would pop up instantly the next time the user accessed the app.

And while it isn’t the mobile app, the Gmail web interface added the convenient option of making it really easy to unsubscribe from junk email such as newsletters and deal roundups, making this one of the most useful features of Gmail by far. 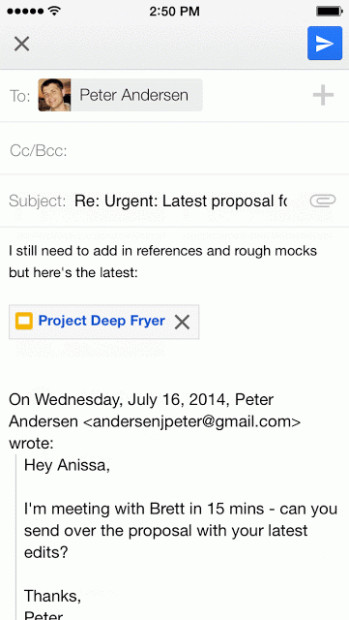 The default Mail app is decent, but if you have a Gmail account (and most users do nowadays), you really can’t go wrong with the Gmail app. It’s one of our favorite iPhone Mail alternatives, and it has all of the great features that you’ll find on the web interface, including tags, filters, etc. All of your settings in Gmail will sync over to your iPhone within the app, and while importing your Gmail account into the stock Mail app works just fine most of the time, the Gmail app works seamlessly with your Gmail account, for obvious reasons.

While we would like the user interface to be a bit simpler and easier to navigate, we certainly don’t mind all of the cool features, and it’s no doubt that the Gmail app is packed with features that you can also find on the web interface, making it the perfect option for Gmail users on the iPhone or iPad.

Sparrow and Mailbox are other good alternatives, but Sparrow (now owned by Google itself) is no longer in development, and the Mailbox app, which is now owned by Dropbox, may be too simple for email power users, although it has one of the best user interfaces of any email app around.

The Gmail app for iPhone and iPad is a free download, and the latest update is available now in the iTunes App Store.