You know that feeling. It’s the one you get when the a notification on your smartphone goes ding and you think it is the important email you’ve been expecting. You pull out your smartphone but no, its just another marketing email from some company that you bought something from some time or the other. It’s frustrating. It’s also frustrating when you open up Gmail in a web browser and see a list of these kind of emails that you have to wade through to find the ones that you want to read.

We all have those emails in our inboxes, or in Gmail’s Promotion tab if you’ve turned that on. And in many cases those recurring emails are our own fault because we subscribed to a newsletter somewhere along the line or forgot to check the opt out box when we made a purchase online. And yes, usually those emails come with a link to hit if you want to unsubscribe, but often those links are at the bottom of the email with usually small type or the text is grayed out. There is even a theory that hitting an unsubscribe link actually tells a company that you’re still alive and kicking, prompting them to kick out more emails to you. There are also services like Unroll.me that will do the unsubscribing for you or roll up suspected marketing emails into one report that you can take action from.

Beginning this week Gmail is going to help with this a little bit. Users will see an unsubscribe link in the header field of some emails from marketing concerns.

You click on the link and you’re presented with an “are you sure” pop up where you can choose to go ahead or cancel. 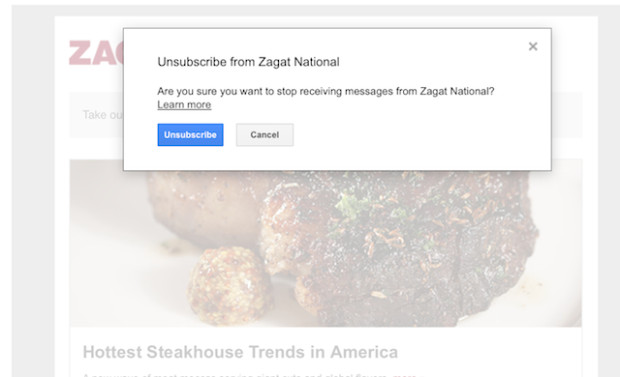 A couple of things to note. Most of us think of these unwanted emails as SPAM. And if you follow my grandfather’s theory about weeds (anything that grows where you don’t want it to grow is a weed), then any email you don’t want to see is SPAM. But not all of these emails are SPAM. Some of them you’ve asked to receive or have not opted out of receiving. Nothing wrong with that. I know in the past I’ve thought I would like to receive a newsletter or emails about bargains from a concern I enjoy doing business with and then changed my mind at some point down the road.

Some have taken to marking those emails as SPAM in Gmail, but that actually creates a concern for Google and legitimate marketing firms. If an email gets marked as SPAM often enough, Google has to check it out, and it could mean that the marketing company can’t reach customers.

This new Gmail unsubscribe link will hopefully eliminate false SPAM flagging and allow you to clean out your Inbox clutter a bit. If you’re using Gmail’s Promotion Tab, you’ll see many of those emails fall under that tab. But keep in mind that not every marketing email is marked. I received several this morning and only a few had the unsubscribe link.

Also note that you have to open the email to see the link. Which in some ways defeats the purpose, but it allows Google to serve the ads that come along with that email. Also be aware that some email systems don’t provide a mechanism for unsubscribing. If that’s the case you’ll see pop up like the one below. 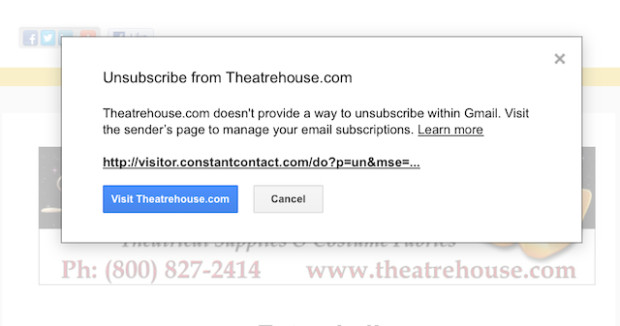 Google has actually been providing a pop up that asks you if you want to unsubscribe from a service since 2009 to try and distinguish between real SPAM and things you want to just get rid of. But this new inclusion in the header should theoretically make it easier for users to just unsubscribe without necessarily marking an email as SPAM.