Mobile video game developer Gameloft has a new trailer for an upcoming fighting game that’s sure to please both fighting game lovers and Roman mythology lovers alike. The new title is called Gods of Rome and there’s a trailer, release date tease and ways to earn currency already available online.

Gameloft announced Gods of Rome in a press release yesterday. The company specializes in making free-to-play games for iPhone, iPad, devices running Android and even Microsoft’s Windows operating systems. Past hits from the studio include Dragon Mania Legends, Asphalt and this fall’s release of Order & Chaos 2. Order & Chaos 2 was a follow-up to the massively successful Order & Chaos Online. Gods of Rome seems a lot like the studios take on the Mortal Kombat franchise. 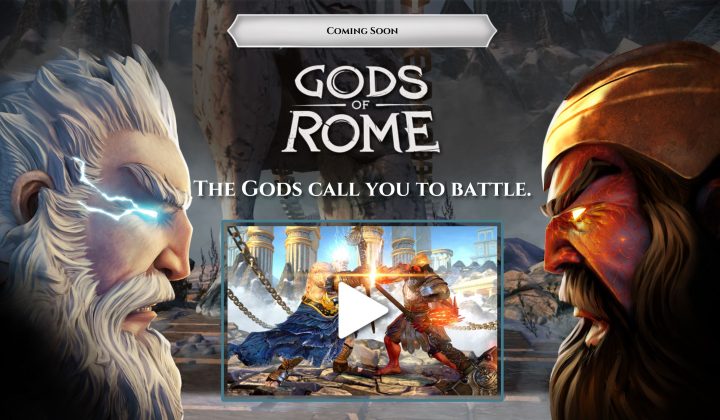 “Lead the world’s mightiest warriors in the fight against an ancient evil that threatens to enslave their souls,” the announcement for Gods of Rome begins. The description for the game goes on to describe it’s main setting as an “age of myth and legend.”

In the Gods of Rome trailer that’s available on YouTube we get to see some of the fighters in action. There’s a typical warrior type that comes complete with a shield and a massive sword. Another fighter uses a massive steel ball to beat his opponents to a pulp. A Roman general appears about halfway through the trailer. He carries a staff adorned with a crest and a sword. Zeus, the Roman god of thunder appears with a staff of his own and hair made of lightning bolts. Having a diverse cast of characters will be key to this game having the longevity with mobile brawling fans.

Having a diverse set of places for players to fight is key. In the Gods of Rome trailer we see a Roman temple, a hill top with the Coliseum set behind it, a destroyed Roman building and the interior of the Coliseum.

In the press release for the title, Gameloft reveals how users control their characters. “Intuitive tap and swipe controls” is listed among the game’s features. Controls could be a huge sticking point for some. Some genres just haven’t made it to smartphones and tablets because gameplay doesn’t translate well to touchscreens. Sometimes movements fell imprecise or sloppy even.

Gameloft isn’t yet ready to say when the Gods of Rome release date is, but it is allowing users to prepare for the game’s launch now. The studio invites everyone to like and share the game on Facebook or share a link to the game’s website over Twitter for in-game extras. Users who pre-register for the game get 1000 Gold, a Quest Sphere and Energy to use in some of the game’s “exclusive events.’ The studio had a similar release reveal and pre-release extras for Order & Chaos 2.

All told, Gods of Rome looks very, very decent, but we’ll have to wait until the game’s release date to confirm whether its worth dumping other brawlers on the iPhone and more for. We don’t know the Gods of Rome release date, but we do know how that it’ll be free. Gameloft no longer charges for titles. Instead, the studio treats them as an ever evolving service, letting everyone play for free in exchange for an in-game economy. How much users earn in that economy determines what things they can unlock. Users can keep playing the game to earn unlockables eventually, or purchase currency to get the items they need faster than those that choose not to play.

Gameloft doesn’t say if Gods of Rome will arrive on all platforms at the same time. Typically, Windows versions arrive a bit after the iPhone and Android versions.