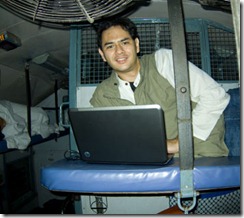 I haven’t seen another Westerner since I got to Borivali and some of the locals have nicknamed me “White Giant.” To say I stuck out like a sore thumb in Borivali would be an understatement. Right now I’m on an overnight train from to Ahmedabad, Gujrat for my brother in-law’s wedding.

We had to wait at the train station for about half an hour. The local trains were so crowded that men were hanging out of the sides and sitting on cars’ rooftops. There were some very unfortunate people on the station’s platforms.

Getting onto our train was an adventure in itself. We only had two minutes to get all 40 people from our party onto the train. A fight broke out as we boarded our sleeper car and the mother of the groom almost got left behind. After about an hour I crammed myself into a bunk and caught a few hours of shut eye.

When I woke up pulled out my notebook and started catching up on email. I was happily surprised to have a slow Internet connection via my Reliance Mobile modem.

I’ve been online for about half an hour and it’s time to disembark. We’ve got a very long day ahead of us, including the wedding ceremony. The ceremony itself will take about five hours. I’m planning on shooting a few thousand photos of the wedding today to give my new camera gear a workout. I’m going to be using my new Sigma 70-200mm f2.8 HSM, Sigma 24-70mm f2.8 HSM and Nikon 50mm 1.8 on my Nikon D700. I’ve brought one 32GB SanDisk Extreme Pro CF card and three 8GB cards. One challenge I have is figuring out how the heck to carry all this gear with me while wearing traditional Indian wedding garb. I’ve been told my ScottEVest is NOT an option.

After the ceremony ends we’re turning right around for another seven hour train ride. 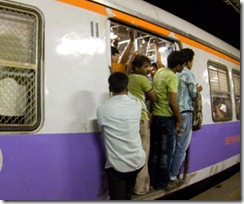