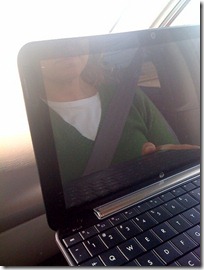 My experiment with my wife and kids using the HP Mini 1000 Mi (or Mini Mi as it is frequently referred to) didn’t turn out quite well.

After our visit to HawkQuest, my wife turned on the Mini Mi to begin importing some pictures, only to be met with a blinking cursor. We attempted several power off / on cycles without success. After we got home, I tried some more tricks like plugging in the power, reseating the battery, etc Ã¢â‚¬” still nothing. I think the OS crashed I couldn’t have said it better than my wife who said ““So much for going mobile Ã¢â‚¬Â

I really like the Mini 1000, but I don’t think I’m ready to unleash the Mi Edition on to my family just yet.

Meanwhile, while we were traveling back from Denver, Kathi was reading Lucky, a magazine geared toward women. She pointed out an HP Vivienne Tam ad, saying something to the effect ““I wouldn’t mind having something like thatÃ¢â‚¬Â. Good thing it runs Windows . 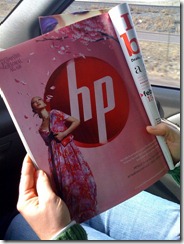