A new set of photos appears to show a gold iPhone 5S, adding to the speculation of new iPhone 5S color options this fall and offering a better look at a gold iPhone than previous leaks.

Rumors of a gold iPhone 5S first took shape in June alongside gold SIM tray colors, but is based on various reports of new iPhone 5S color options from analysts and supply chain sources.

Apple offers multiple iPod touch colors, but sticks with black and white for the iPhone. If Apple plans to offer a new iPhone 5S color option gold would be a timeless color to add to the lineup, though consumers might rather see a pink iPhone 5S.

Read: No Need to Wait for the iPhone 6 or iPhone 5S for a Color iPhone

This is the first good look at what could be the gold iPhone 5S. In a series of six new photos C Technology a well-known leaker of device info on Chinese social networking site sina weibo shows the back of what they claim is a gold iPhone 5S. 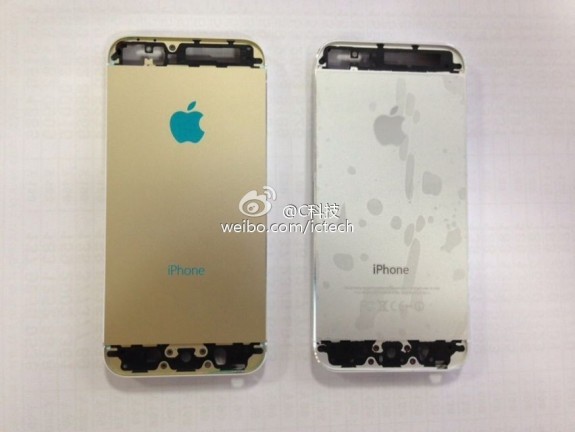 Is this the gold iPhone 5S?

The image above could show a gold iPhone 5S on the left and an iPhone 5 on the right. This gold color would likely be anodized, not painted on. The Apple logo and iPhone branding on the back would not be teal at release, but likely a shinier gold hue. In the upper area where the glass back of the iPhone would sit users can see a slightly new design. 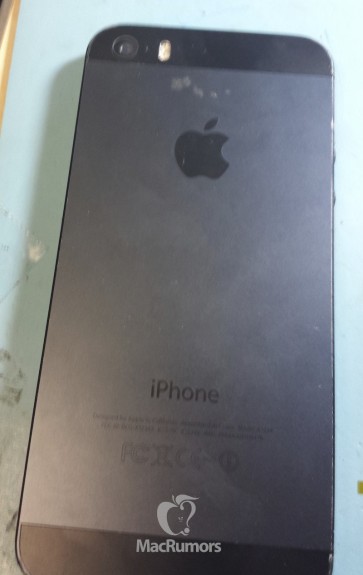 This alleged iPhone 5S photo shows a new dual-LED flash and the same design as the iPhone 5. 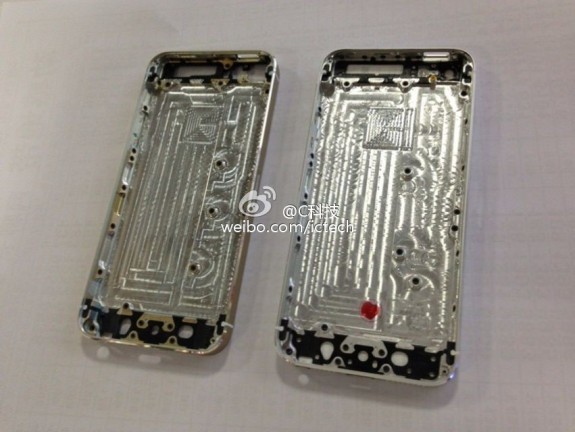 The alleged gold iPhone 5S on the left features a new screw placement.

The inner part of this alleged gold iPhone 5S back panel shows a new screw pattern which doesn’t match up exactly with earlier iPhone 5S designs, but could be a work in progress or a prototype. 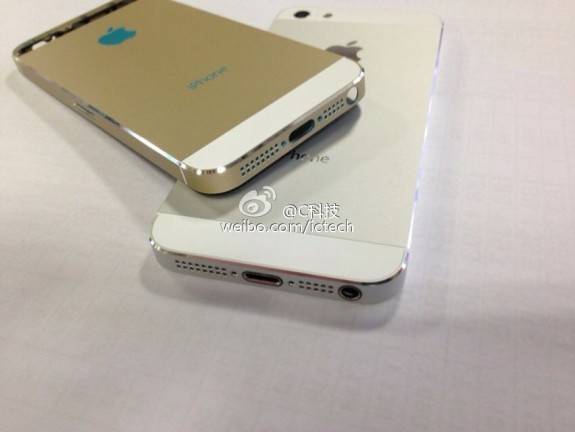 An alleged gold iPhone 5S with a gold chamfered edge and a white glass backplate.

Assuming Apple announces a gold iPhone 5S it would likely feature a gold chamfered edge as shown below, and come with white glass inserts rather than black as the offsetting color.

A recent iPhone 5S leak claimed to spill the details on the iPhone 5S specs, but it’s not clear if Apple is actually planning NFC for he iPhone 5S as the company introduced a competing sharing method in iOS 7.

Apple is reportedly planning an iPhone 5S launch event for September, and the iPhone 5S release could come in late September or early October. Multiple reports indicate iPhone 5S supply may be limited during the initial weekend and weeks of release.

AT&T is already offering early iPhone upgrades to shoppers in an attempt to move iPhone 5 units ahead of an iPhone 5S release. For patient users this offers an early upgrade opportunity at a better price.