Today Google and Samsung introduced a new Chromebook with a $249 price point and 6.5 hours of battery life.

The new Chromebook looks like a plastic MacBook Air with the same 11.6-inch 1366×768 display and black island-style keyboard. The device is 0.8-inches thin and weighs 2.5 pounds.

To keep the thickness down Samsung put the USB 3.0, USB 2.0, and HDMI ports on the back of the device. Only the headphone jack and SD card slot are on the side of the device.

Google and Samsung won’t say how much space is available on the SSD, but it likely isn’t much. Google wants users to use the cloud instead of local storage on the Chromebook, and is offering 100GB of Google Drive storage for two years to anyone who buys the device. 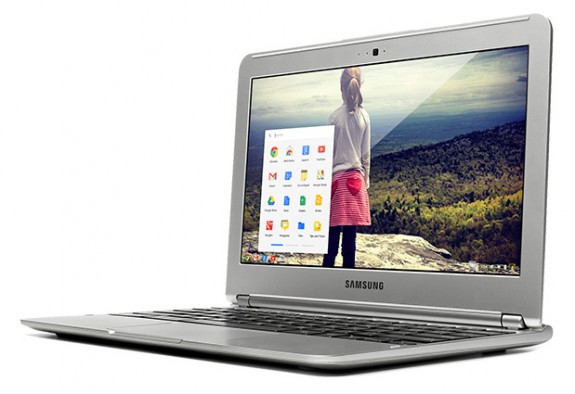 The Samsung Chromebook, like other Chromebooks before it, runs Google’s Chrome OS which boots directly into the browser. That means without Wi-Fi the Chromebook only offers a few offline-enabled web apps. The upside is users don’t need to worry about viruses and the device boots in only 10 seconds.

The $249 Google Chromebook is available for pre-order now, and will ship on Monday October 22. Users can buy the device from Amazon, Best Buy, NewEgg, and TigerDirect in the U.S.