We had previously reported that Google is working on a unified messaging and notification service called Babble, but the name may actually be spelled ‘Babel’ at launch. Babel, or Babble as it was previously rumored, would be a cross-platform unified messaging solution that will merge Google Talk, Google Voice, Google+ Messenger, and other messaging services into one unified experience. The service is rumored to be launching on iOS, Android, Chrome, Google+, and Gmail. 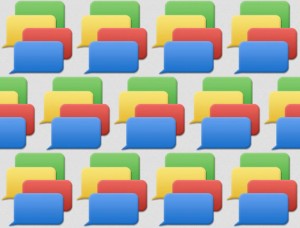 Here’s what Droid-life is saying that Babel will feature:

So while initially, it was believed the service would be called Babble, which means talking foolishly or idly, the word also is close to the way Babel sounds. And Babel would make more sense. Rather than meaningless talk, Babel would indicate more connections with languages. Phone Arena writes:

This name would also make sense, because it is a word that means “a scene of noisy confusion”, as well as having the direct connection to the biblical Tower of Babel, which is the story of how God supposedly created all of the different languages in the world to confuse people so they couldn’t get together and build the tower to heaven. And, knowing Google’s geek nature, it would also connect to the babel fish, which was the universal translator from The Hitchhiker’s Guide to the Galaxy. Babelfish is also Yahoo’s online translator that has now come to power Bing Translate. If Google did choose this name for the product, we kind of wonder if that means Google is planning to merge Google Translate with the messaging to offer real-time translations in chat.

With Google I/O slated to kick off in mid-May, perhaps Google will announce Babel at that venue and we’ll learn more about how unified messaging will help to simplify our lives. And at this point, it’s still unclear if Babel will even be the final name of the product, or if it’s just a code name.