A new report from TechRadar claims that Google’s rumored Babel chat service may launch under the name Google Hangouts.

The rumored Babel is a service that may unite all of Google’s current chat options including Google Talk, GChat and Google+ Messenger under a single name. It appears, however, that Google will drop the biblical Babel name in favor of one that matches its video chat service.

Alleged screenshots of the new service include a menu option that reads “Sign out of Hangouts,” which seems to indicate Google will call the chat service Hangouts. The screenshots also show an option to share photos through Hangouts as well as emoticons with options that look like they may contain emoji. 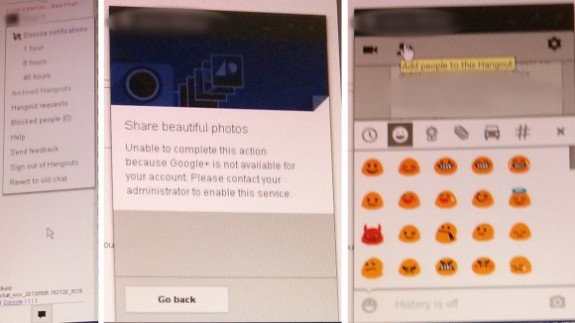 The chat window looks very similar to Google Talk, though it has a different name and presumably a few other new features. Some rumors claim it may integrate with Google Voice, which doesn’t integrate with any current Google chat services.

The new Hangouts service will likely debut during Google I/O according to TechRadar’s source. The source didn’t say when non-Google employees can use the new service, however.

Android users will presumably get access to the service via an update to either the Google Talk or Google+ Messenger app. With any luck those users will have the option to delete the app that doesn’t receive the update so they only have one chat app on their phone.

Google’s current chat apps appear in both Gmail and Google+, and Hangouts will likely stay in those services as well.