Users with devices running Google’s Android operating system can now remotely lock their device without having to install tools from third-party developers.

While Google hasn’t formally announced the feature addition on its Android Blog just yet, it’s already available to users who head to the Android Device Manager webpage. Remote device lock and remote device wiping at least catches Google’s Android up with other platforms in terms of security features. The updated tools were first spotted by AndroidPolice

Although Google is just bringing remote locking and erasing functionality to Android, other platforms have had it for years, including iPhone and Windows Phone. Until now, users have relied on tools like premium versions of Lookout Security to add this type of functionality to their devices. Some Android manufacturers, as is the case with Sony Mobile, simply built their own alternatives. 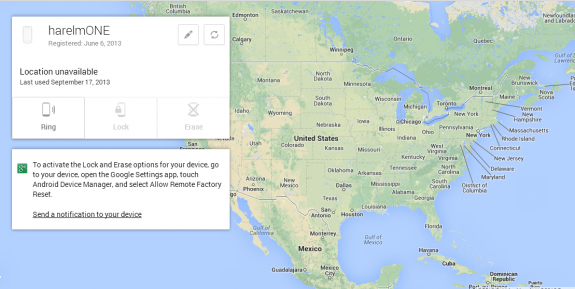 The setup process is pretty straight forward. Users simply need to go to the Google Settings application on their Android Device and enable Lock and Erase, and Remote Factory Reset. Google is offering the bolstered security features to users free of charge, as long as they’re running one of the versions of Android that are supported. Only devices running Android 2.2 or later will be able to use the new tool.

Google first debuted Android Device manager last month. Over the years, the company has seen no end of criticism for not offering these types of security features to its users, especially since Android is the best-selling smartphone operating to date.

Should a user lose their Android device and the tool is enabled, they can head to the Android Device Manager to immediately lock out their device, and remotely wipe its contents before someone can browse through their mail or contacts. They can also use the tool to ring their device if they’ve managed to misplace it somewhere nearby, like in the couch or around the house.