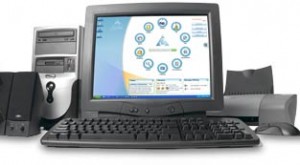 TechCrunch is floating a rumor that Google is not simply working with PC makers to get Chrome OS on to netbooks, but actually working on their own branded netbook as well. It is similar to what people are saying about Android and the presumed Google phone. Very exciting stuff. If it all pans out, I predict Google will become the new AOL within a year.

Oh yeah, remember when AOL tried their hand at low-cost branded PCs five years ago? Sure, their situations are vastly different. Google’s presumed goal will be to open new avenues for growth, while AOL was trying to reverse their downward tumble, but the general concept of luring in service users with a subsidized PC is the same.

The major difference is Google doesn’t charge a subscription fee to those customers… almost. Actually, they follow the freemium business model where they offer basic services for free then charge for premium services, like added storage for Gmail and Picasa. They do make most of their money selling ads, but once upon a time, so did AOL (still accounts for about half their revenue).

Also, netbooks and handhelds are growing markets while desktops were on the decline. Timing is everything, and Google seems to be right on time for getting into the hardware market. Still, a plan that can be described as “like what AOL did in 2004” is a tough sell.