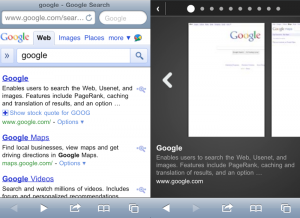 Google is rolling out a new feature for Google searches in iOS Safari browsers, allowing users to see a preview of the page content in search results through a feature called Instant Preview.

In the search results in the Safari browser on mobile Apple devices, users will now see a magnifying glass, which when tapped on allows you to preview the content on the linked webpage. The feature was reported by 9to5 Mac, but at the time of this writing, it was not enabled for my Google search results on my iPhone 4.

On the desktop, Instant Preview allows users to preview the page content without further clicks–users can hover their mouse over the link and get a preview off to the side. While the same paradigm cannot be afforded to the iPhone due to limited screen real estate and the lack of a hover feature on the touch screen user interface, it’s unclear if the same level of utility is translated for the mobile user experience with Google’s Instant Preview feature as users still need to tap on a link–in this case, the magnifying glass–and be taken to a separate screen to “preview” the content.

In the case of the AT&T iPhone, however, the feature may help users conserve data bandwidth. With finite, capped data plans on the carrier, users can potentially save on data use with Instant Preview by not having to load up the webpage directly by clicking on the actual webpage link. With users having to click through multiple links at times to arrive at the best result in Google’s search results, Instant Preview may help to reduce data use with small snapshots of webpages.

Would you be using Instant Preview on your iOS device? I am not sure I would as it requires the same number of steps to arrive at the webpage compared to Instant Preview and doesn’t save any clicks for me, but it’s nice to see more innovation in the mobile space.