Following the company’s buyout of the Waze, mapping service earlier this year, users had expected that Google would bring some of the real-time mapping solutions of Waze’s application to Google Maps. That day has come, As of right now, Google Maps for Android and iOS  users are able to get directions based on real-time traffic conditions.

Google detailed the new features in a blog post this morning. Unfortunately, it hasn’t rolled out the feature worldwide just yet. Only Google Maps users in Argentina, Brazil, Chile, Columbia, Ecuador, France, Germany, Mexico, Panama, Peru, Switzerland, the United Kingdom and the United States will get the feature initially.

Real-time mapping is huge for smartphone users who frequently commute. Instead of calculating the route to take based on initial conditions, the new technology will Google maps to periodically check for the latest traffic conditions in the user’s area. This means, it’s more likely that users will be able to avoid sudden traffic jams and road hazards. 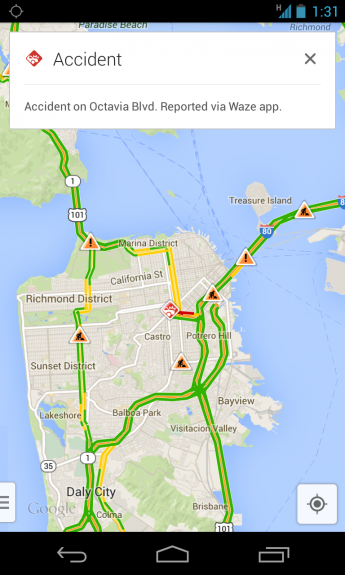 Since users themselves are mostly responsible for the traffic information that Waze, and now Google Maps, relies on, the information is curated by  other drivers, lending it a bit more accuracy than traffic radio stations or news websites who track traffic in a specific area.

Google is also taking this opportunity, to add some features to Waze’s iPhone and Android application as well. The company has now integrated Google Search into Waze, so that “users have access to even more search results when navigating.” Google Search is now included with, but won’t replace the search providers that are already offered inside the application.

Google has also added its Street View technology to the Wazy Map Editor so that users can easily correct any mistakes they find, just as they can with maps are already available on the service.

Early rumors had pointed to a potential buyout of Waze by Apple since its technology was heavily integrated into Apple Maps, its in-house solution for directions and traffic. That buyout never came. Instead, Google announced that it would purchase the company for an unspecified price back in June.

So far, Google’s purchase of Waze doesn’t seem to have negatively affected Apple Maps, even though Google Maps directly competes with it for users. According to today’s blog post, Google has plans to keep adding features to both Waze and Google Maps, indicating that the company has no upcoming plans to shut down Waze at some point in the near future.