With more people using the cameras on their larger size tablets to capture photos and videos, Google is responding to the trend by porting its YouTube Capture app to be compatible with Apple’s iPad and iPad mini slates. The app was previously made for the iPhone and iPod Touch, and it looks like Google has updated the app to make it a Universal App, bringing compatible to all iOS devices.

As such, tablet users who use the YouTube Capture app will have the app running natively on their slates, rather than have a scaled up smartphone experience. 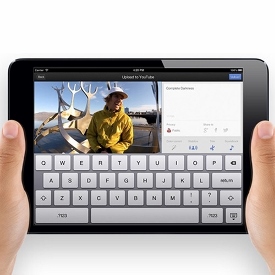 The app allows users to shoot video directly from the app as well as make quick video edits before uploading and sharing the captured footage to the YouTube network. It makes it more seamless than capturing video with the iPad’s camera, importing the clip(s) to the paid iMovie app, and then uploading from the YouTube app. The YouTube app essentially combines all these separate steps into one app.

The app also was recently updated by Google to allow 1080p video capture as well.

And while editing work can be more fluid thanks to the large screen real estate of that a tablet, like the iPad and iPad mini, affords, shooting video with a smartphone may still be a bit more convenient as a smartphone goes everywhere with you whereas a tablet may not. Not only that, but it may be awkward to hold a tablet up to capture video.