The Nexus 7 tablet is in hot demand with its high-end features set as well as low $200 entry pricing. As such, demand for this tablet is high and Google is struggling to get orders and pre-orders shipped. Customers who order the device today through Google’s online Play Store can expect 8 GB model to ship within the next three to five business days while the larger 16 GB ($250) model will be shipping in three to four weeks. Regarding concerns about shipping and delays, Google has updated its FAQ to address those questions from customers.

We will have all orders placed through July 13 processed and shipped soon. Orders placed after July 13 will ship according to the quoted timeframe when you purchased and we will update you with a tracking number when we’ve shipped. Thanks for your patience. 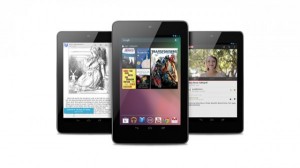 The company also breaks down the expected shipping times by country as well. In addition to the U.S., customers in Canada, the UK, and Australia can also order the flagship Nexus 7 tablet, which debuted Google’s Android 4.1 Jelly Bean OS:

We’ve shipped all Nexus 7 8GB orders. We are in the process of shipping Nexus 7 16GB orders and will ship them in 1-2 weeks.

The popularity of the Nexus 7 slate, which is deemed as the best 7-inch slate right now for your money according to many reviews, has led to many retailers in the U.S. being sold out and out of stock on the tablet.
Related Topics:GoogleNexus 7SlateTablet