Google Drive is finally here, at least it will be here soon according to a pulled Google France blog post.

According to TechCrunch, Google France accidentally posted the description of Google’s cloud storage service on its official blog. The post was quickly taken down, but not before some were able to see it and save the text. After running it through an English translation we know more about Google Drive.

Google Drive will start at 5GB for free users, with options to increase storage starting at 20GB for $4 a month. The service will integrate with Google Docs and all user documents on the service are automatically uploaded to Google Drive. In the blog post, Google actually called Google Drive “the next evolution” of Google Docs. 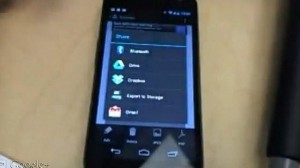 To go along with the Google Docs integration, Google Drive will have OCR support and image recognition. That means that any images or PDFs with text uploaded to the service will be searchable through those words. It should work just like Evernote, which has a similar feature. Image recognition means that if you store a picture of the Eiffel Tower in Google Drive, searching for “Eiffel Tower” will show that picture in the results.

The PC, Mac, and Android apps for Google Drive will launch today (or whenever Google Drive officially launches). There is an iOS app coming as well, and it should arrive in the App Store in a few weeks.

Google promises that Google Drive will have 99.9 percent up-time, though we’ve come to expect Google to keep its services online all the time, so that isn’t much of a surprise.

Google still hasn’t made an official announcement on Google Drive, but we expect that it will be coming soon.