The confusion that has been surrounding Google’s intentions for Google Drive and its new standalone productivity Apps is still continuing now that Google finally released an update for the Android version of Google Drive. Last week Google released standalone Apps for Google Drive and Google Sheets, its cloud based word processing and spreadsheet solutions. Those new Apps came down the pike along with an update to Google Drive. While many were excited to see the new standalone Apps (a version of Slides, Google’s presentation solution is promised for the future), that excitement quickly turned to confusion when users discovered that Google Drive had been stripped of some of its functionality. 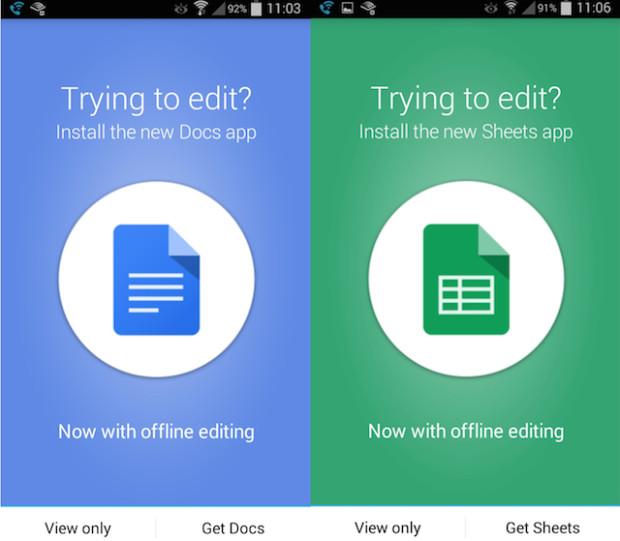 The Google Drive App on both iOS and Android had been a one stop document management and editing tool for those who used Google Docs, Sheets, and Slides. But Google has now stripped the editing functions out of Google Drive, instead forcing users to download the Docs and Sheets Apps if they want to create and edit new content on that platform. Quite a few users were upset about the multi-App requirement on iOS and that is continuing with the Android update of Google Drive. Google stated on the App update page that this would allow them to make quicker and easier updates to Docs, Sheets, and Slides, now that the editing functions weren’t wrapped up in Google Drive. That mollified some, but not all. 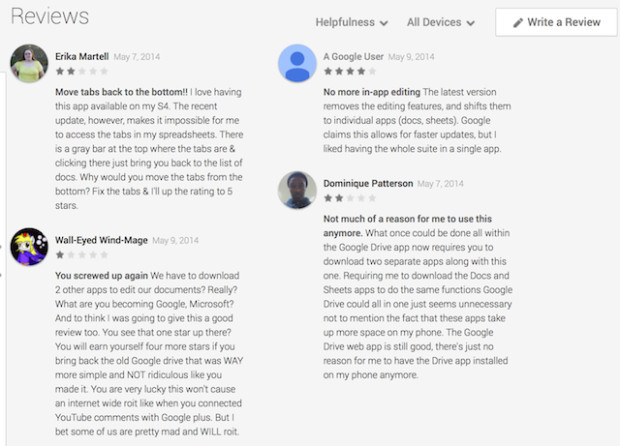 But some of the confusion has indeed cleared up with the Android version. In the iOS version users who had been accustomed to storing documents in a traditional hierarchical file and folder system found that they needed to bounce back and forth between Google Drive and Google Docs or Sheets when they were creating new documents. If a user choose to create a new document in a directory or folder below the root in Docs or Sheets, they would find that new document would appear in the Google Drive root folder. That forced them to manually move the document to the directory they wished the document to reside in.

That behavior seems to be somewhat fixed in this Android version of Google Drive. If you are within the Google Drive App and navigate to a sub-folder and then choose to create a new document, that new document will appear in that sub-folder. Note that to do this, you are asked to choose to create either a Sheets or Docs file and once you make your selection you are taken to that App which then opens your newly created document.

But, if you launch Sheets or Docs separately to create a new document, that new document will be created in the root drive of Google Drive only. So a user who relies on hierarchical file structure will still have to move back and forth between multiple Apps, depending on whether the process of creating a new document began in Google Drive or one of the standalone apps.

Another confusing issue that left many perplexed was sharing. Both the iOS and the new Android update for Google Drive share this confusing new functionality as I described in an earlier post:

With the new multiple App functionality there is a problem if you are used to sharing folders instead of just individual documents.  Remember all newly created documents end up in the root folder of Google Drive. This means that to share that document as a part of a shared folder, a user needs to go back to the Google Drive App and move the document to the shared folder. But wait. That’s not all. Then the user needs to manually share the newly created document with each individual that the folder is shared with.

To call that process inelegant is an understatement.

Editing documents is equally confusing in the new Android version as it is in iOS with the new trifecta of Apps. Actually it is a bit more confusing. First, in Google Drive any Apps you may have stored there previously will appear. This includes documents created with either Google’s suite of Apps or Microsoft’s Office suite. But, only documents created with Google’s Apps appear as available in Docs or Sheets. And they appear without any regard for location within a folder or directory structure.

Second, depending on the type of document you are editing it is difficult to know what App you might be using for editing purposes. After updating the Google Drive App on the Galaxy Note 3 I sought to open a Word document. This first time I was prompted to open that document in another application. I was given the choices you see in the picture below. Note that none of the choices are Google Docs. 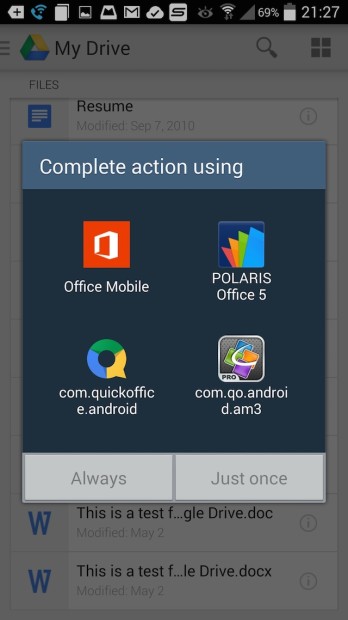 I chose Google’s QuickOffice. The document opened. I made a few edits and saved the document. It appeared in the Google Drive directory with its new name. From this point on, any document previously created with Microsoft Word and stored in Google Drive appeared to be opening for editing within Google Drive. The same happened with Excel documents.

Not surprisingly, what is happening here is that Google Drive is opening those documents in QuickOffice. Some users are confused because they think they are editing in Google Drive, but if they have chosen QuickOffice (or any other) as the default App previously they are actually editing in that App. QuickOffice will not edit Google Docs or Google Sheets. So, if you use Google Drive as your document cloud storage and syncing solution, you need to have an additional App to edit those documents. In and of itself that isn’t confusing once you think about it for a second, but the previous one stop document management and editing solution that users were accustomed to is leaving some wondering why some documents require Docs or Sheets to edit and some don’t.

As I have mentioned in previous posts, Google is missing an opportunity by not having an option to convert those documents to its Docs or Sheets format. But then Google seems to have also missed the boat here on communication regarding its new strategy whatever it may be.

For those looking to create or save documents created with Google Docs or Sheets in a specific directory or folder location, your choices are muddled depending on which App you choose to begin the process of creating a new document within. With Google Drive you have more control over the location. With the standalone Docs or Sheets Apps all newly created documents go into the root directory of Google Drive.

Note that with QuickOffice you have a Save As option to help point you to the eventual destination of the document.

This most likely will all get cleaned up in future updates to the Apps. But as it stands now Google is leaving many existing customers scratching their heads and quite a few upset at the changes.