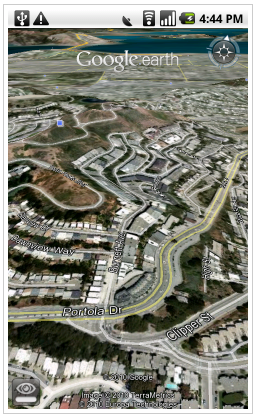 Google Earth is one of the coolest Google applications available.  It has the “wow” factor everytime you use it to zoom in on a street view of your house, or look at the Whitehouse, or whatever you would like to look at around the world.  Google Earth has only traditionally been available via desktop (for both PC and Mac).

Well, according to the Official Google Mobile Blog, Google Earth is now available for download in the Android Market.  But, there is a catch.  Currently, it will only run on Android 2.1.  This means only people with a Google Nexus One phone can use the application right now.  There is talk that the Motorola Droid will be getting an upgrade to 2.1, and maybe some of the other HTC smartphones may, but that is up to the vendors right now.  Or, there is always the option to root the phone and get a ROM from Cyanogen.

As we hinted at last month, we knew Nexus One was going to be a great platform to showcase the rich (and technically demanding!) features of Google Earth. With a 1GHz processor, advanced 3D graphics, and Android 2.1, Nexus One packs a lot of performance in a thin package. Ever since we got our hands on one, we have been putting it through its paces, drawing complex scenes of 3D imagery, terrain, roads, and other layers, and Nexus One never misses a beat. Now that we have put the final touches on the app, we are happy to announce that the latest member of our family is ready for the world — Google Earth for Android. This is our fastest mobile version of Google Earth yet, with a smooth framerate and a beautiful 800 x 480 screen.

With the release of Google Earth for Android, we are also introducing the Roads layer, a very popular feature of the desktop version of Google Earth. Now you can get a better sense of where you are with road labels drawn on top of the satellite imagery.

In addition, we have taken advantage of the integrated voice recognition capabilities of the Android platform to provide the best Google Earth experience yet — a pocket globe that responds to your every command. Try speaking “Eiffel tower” or “best burrito Mission district of San Francisco.” Maybe you’re trying to find some nice lodging for an upcoming getaway to Lake Tahoe. Just say “romantic getaway Lake Tahoe.” With Google Earth for Android, we have brought together the convenience of Google Search by voice with the power of Google Local Search to make it easier than ever to navigate the globe and find whatever you are looking for.

So, for now, Nexus One users enjoy Google Earth!