Don’t get too excited just yet, as the company is merely just “exploring” the idea of expanding its Google Fiber service to these areas, and there’s a host of factors that go into whether or not Google can expand its Fiber service to such areas, such as “factors that could affect construction, like topography (e.g., hills, flood zones), housing density and the condition of local infrastructure.”

This doesn’t mean that Google has announced Google Fiber for these specific cities just yet, but merely just to see what it would take for these cities to get equipped for such internet service. 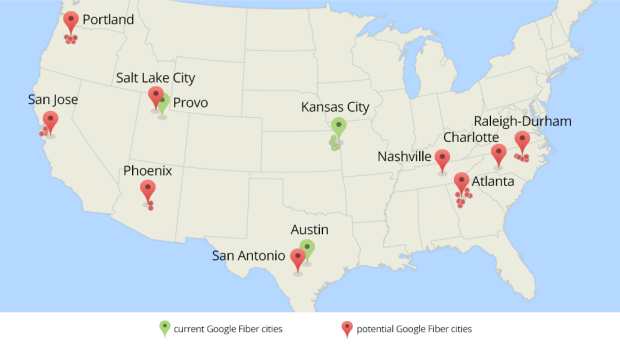 Right now, Google Fiber is only available in Kansas City, Austin and Provo, all three of which are extremely populous areas (compared to New York City, Los Angeles or Chicago), but we aren’t surprised one bit that Google is considering expanding out even farther.

This announcement sure doesn’t seem like a coincidence just a week after Comcast announced that it would purchase Time Warner Cable, thus making the company nearly twice as big and gaining closer to monopoly status. Google’s announcement today could be a quiet response to the acquisition. Indeed, Google Fiber does pose a threat to Comcast, but competition does that, and it’s what makes the economy so great.

Verizon’s FiOS service is another fiber optic internet service that’s available in select states, but it’s definitely not as cheap as Google Fiber. However, FiOS provides insanely fast download speeds to business and residential areas alike, at which some cable internet providers can’t match, but like Google Fiber, FiOS is only available in select locations, which seems to be the overall theme for fiber optic internet.

Either way, it’ll be interesting to see how the next few years play out and whether or not Google Fiber can make a big dent in Comcast and other larger internet service providers.